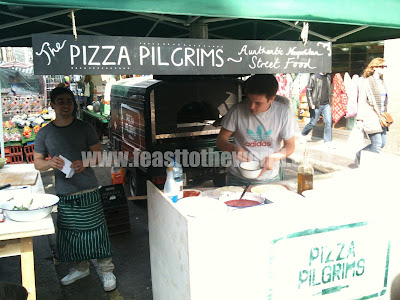 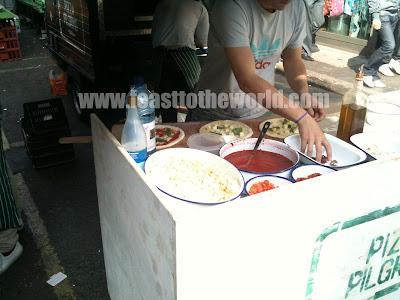 I don't like pizza. For no particular reason, I just never seemed to have the same fascination that most people have in regards to this Italian creation. Maybe it's due to the number of bad versions from the horrible Pizza Hut chains that I was forced to consume when I was young; or the occasional unwilling dining dates in the Pizza Express who serves just equally bad takes on this dish. Before you say anything, I have been to Rome and surprisingly, had a really good pizza that was topped simply with a rich and deliciously tart tomato sauce and basil on a thin, crusty base which I thoroughly enjoyed. But that was probably the only good one that I can remember.

However, ever since I got wind about this little street van establishment, I was immediately captivated by the back-story of this entrepreneur brother duo. Rather admirably, they have been travelling around Italy in order to learn the perfect techniques and recipes to make authentic Neopolitan pizza. Ever since their debut on Berwick street, I have been watching them at work with sheer fascination. The dough were homemade and every pizza is cooked fresh to order in the mobile fire oven at the back of their Piaggio Ape 50. Everytime I walked past, there is a queue building up and these seems to get longer and longer by the day. 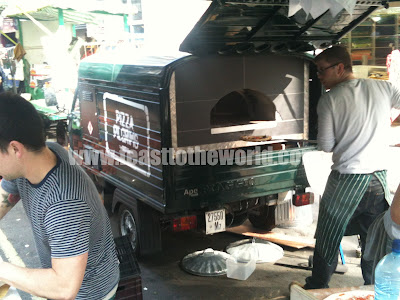 After putting it off time and time again, I have finally decided to pay this pizza pilgrims a visit. I  managed to persuade of couple of my friends, Jonny and Oli, to join me in this venture on this glorious sunny day for lunch. 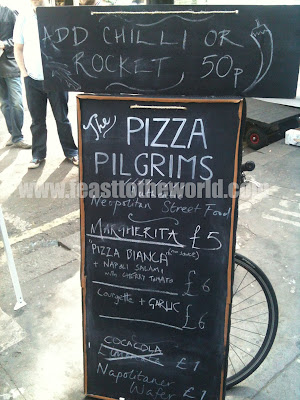 Through the buzzing crowds of Berwick street, we arrived at this charming little stall. Oli and I both ordered the today's special - Pizza Bianca and Jonny decided to go for the Margherita. Even though the Bianca was supposed to consist of Nepoli sausage, I was told that they've ran out and will instead have andouille spicy sausage which was fine by me, always love a spicy kick in my food.

There was a really friendly atmosphere in the stall. The owners/chef were busy making the pizza, but still managed to chat to the diners who were were waiting patiently throughout the whole process. We were all mesmerised by the fire oven in the back of the van. There's something truly magically about watching a pizza being made from scratch.

The little balls of pizza dough - which I've  learnt later on were a mixture of overnight dough and fresh yeast - were placed onto the work top. These were then flatten by pushing the fingers into them and turning them as he go along to spread it into thin discs. After which he just started tossing them effortlessly, as you would, like a true pro, into a paper thin base for the pizza. The thick tomatoes sauce were then spread onto the bases, little cubes of mozzarella were then scattered on top of these and the rest of the ingredients following swiftly. These were then placed on the wooden paddle and insert into the fire oven to be cooked. It's all rather theatrical and just added to the whole experience. I would expect nothing less for a street food! 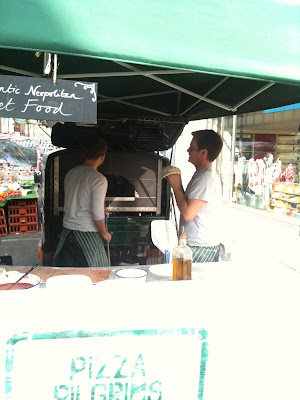 When the pizza were ready, they started yelling out names of the diners to alert them of their order. Rather unfortunate for a chap named 'Matt', after a few attempts of trying to locate him with no success, they gave the Bianca to my friend Oli, who was next in line.
'Mmm...this is good' muttered Oli between mouthfuls.
Due to the no-show of 'Matt', they called out my name and a few other just to make sure that we are still present. Mine was ready not long after, and when my name was called, like a good obedient kid, I went forward, unable to contain my excitement after the prequel of seeing the chef at work, and grab this delicious looking pizza. The mozzarella has melting into a thin pool of creamy white strands coating the flavoursome tomato sauce. It was salty and rich and the addition of fresh tomatoes just complemented the richness beautifully; together with the aromatic basil and the spicy andouille, is simply delicious! But the star of the dish is definitely the pizza base. Like the pizza that I've had in Rome, it's a thin crusty bread that has a hidden depth of flavours, just as a good artisan bread should be and not thick, chewy and bland. 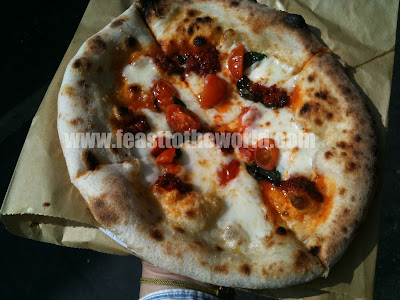 Jonny 's Margherita unfortunately was slightly burnt so they decided to make him a new one instead of serving it. Even though that was a tad annoying but it did showed how they attention to quality control and will only offer the best to the diners, which is another admirable trait to have. They did tried to offered Jonny a drink whilst he waited and when his pizza was finally ready, they offered him a sincere apology, which is a good way to do business, a plus point from Jonny who thought that was rather nice of them to acknowledge their mistake.

'Was it worth the wait?'  I asked him as he took a bite into his Margherita. 'Hmm...' was the answer as he munched his way through with a big smile on his face, nodding his head. 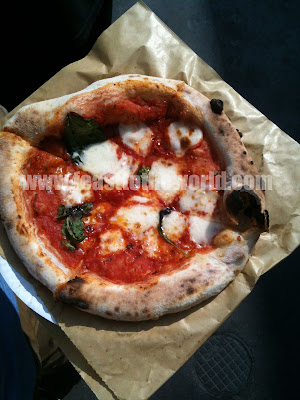 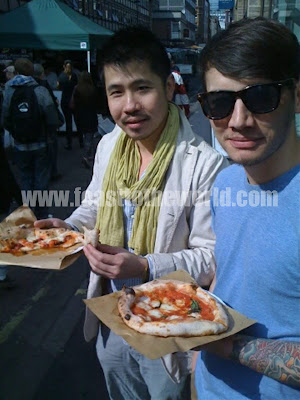 Was I a pizza convert  by the end of this, you might wonder. Sadly not. I still won't be going to  any of those hideous pizza restaurant anytime soon. But I will definitely, without a doubt, go back to the pizza pilgrims again for their artisan Neopolitan pizza. In fact, when I got back to the office after lunch, I have started a campaign to organised another trip to the Berwick street market for another bite of their delicious crusty pizza soon.

To all the second-rate pizza restaurants/joints out there, this is how a real pizza should be made.....with lots of passion and sincerity.

Posted by J@Feasttotheworld at Saturday, March 31, 2012