Another Helping Of Spanish Sunshine On A Good Friday - Pizarro, London SE1 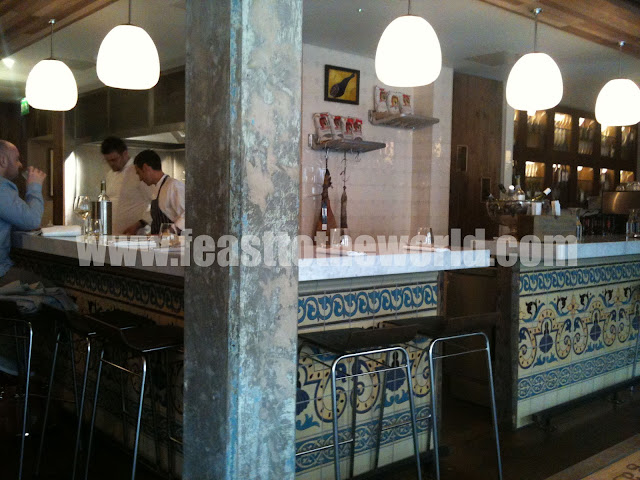 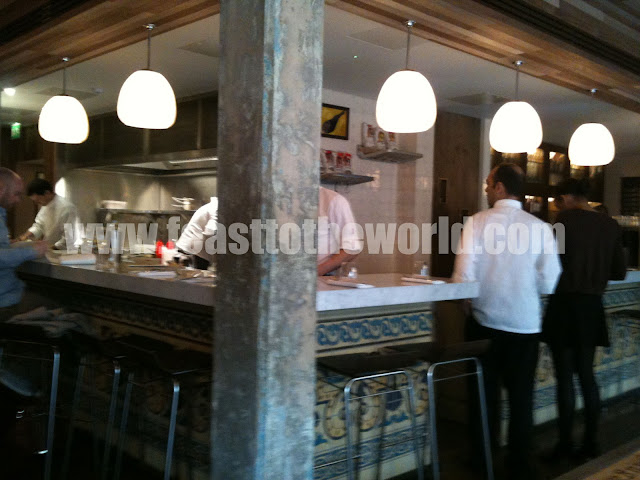 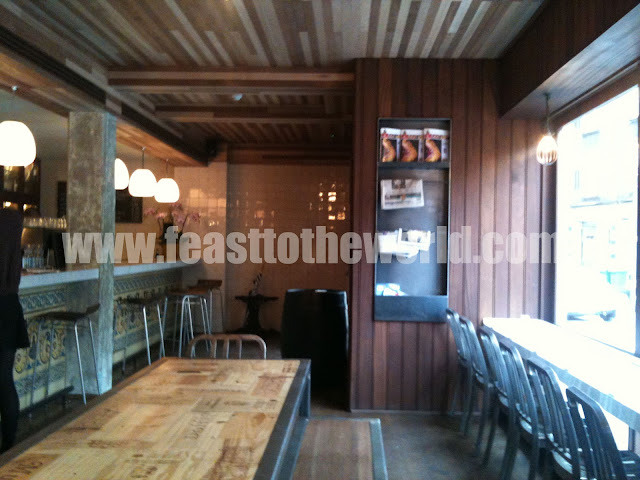 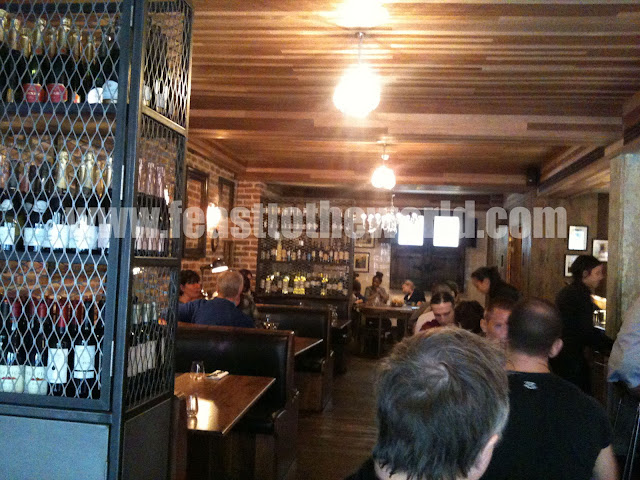 After only a couple of weeks ago since I visited José, I found myself gravitating toward Jose Pizarro's other establishment. A stone throw away from the Sherry and Tapas bar in Bermondsey, Pizarro couldn't have been more different from the outside. It looked slick, spacious and contemporary compared to José which is more traditional and cosy. Upon entering, it looked strangely familiar (in a good way), like it's an extension of Jose with similar identity. Wooden flooring and slick decking ceiling; Hispanic design tiles surrounding the open kitchen; drop pendant lights and graphite counter by the window; and the black board depicting the specials of the day. Quite cleverly, this all link back to the other restaurant. The only different is that this obviously has been designed for seated dining with it's spacious arrangement.

M and I obviously came at a good time as it's rather quiet. Well 5 o'clock on a Good Friday afternoon is rather a tad  early for the dinner service.

We were immediately approached by the waitress and were offered a choice of seating, we opted for the bar so that we can overlook the kitchen. But after trying to adjust ourself in to the tiny space in between the pillar and the pair of diners sitting in the middle of the bar, we decided that it would be best if we move to a table instead. And so we did, to the long table right by the bar. 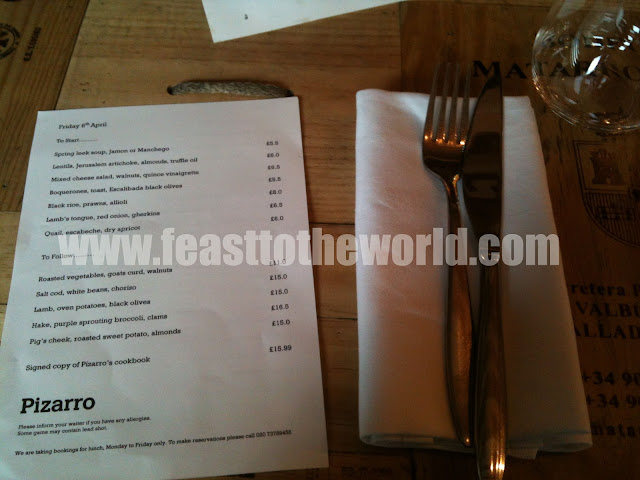 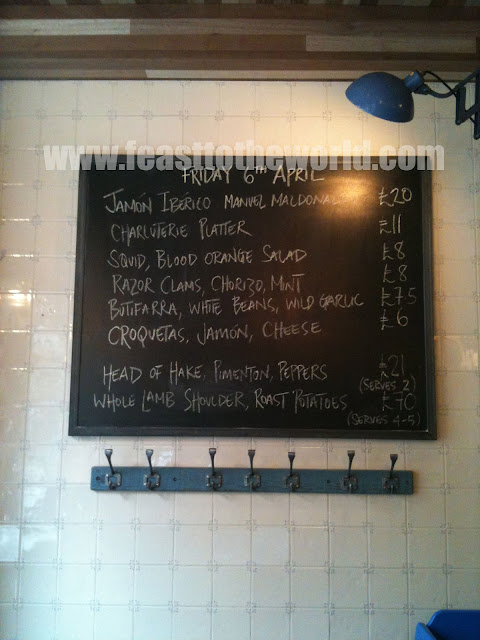 While deliberating with the menu, we were offered some sliced bread and a dish of pickled radishes and cauliflower that were simply dressed with olive oil and a touch of salt. Crunchy and refreshing.The amiable waitress took our orders and left. After a while, I was beginning to wonder if we've ordered any wine as no wine glasses were offered and there was not a lot of movement coming from the bar. We queried  the Matre 'd  who immediately went over to the till to check and then just as swiftly the waitress brought over some wine glasses and apologised for the mistake. The Matre'd then came over with the bottle of wine and once again, assiduously offering their apologies. 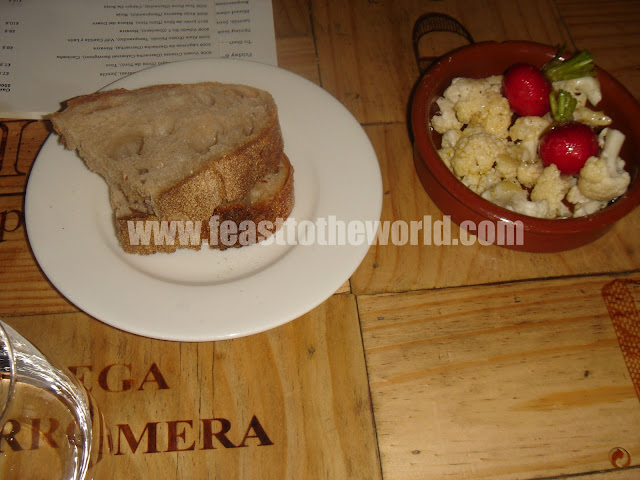 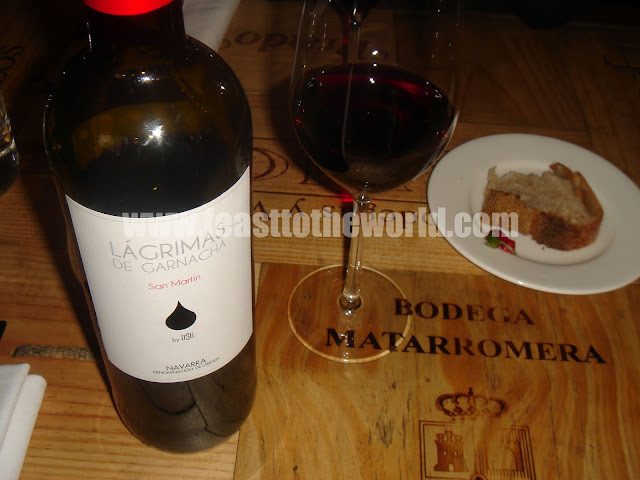 The starters arrived promptly. M has the prawn with black rice and was advised to mix in the knob of butter before consuming. The prawns were huge and juicy with a sea-fresh sweetness, the rice were perfectly cook with an al dente bite and enriched by the nutty, unctuous squid ink and the creamy melted butter. The pieces of tender squid contributed to a deletable texture to the whole dish. 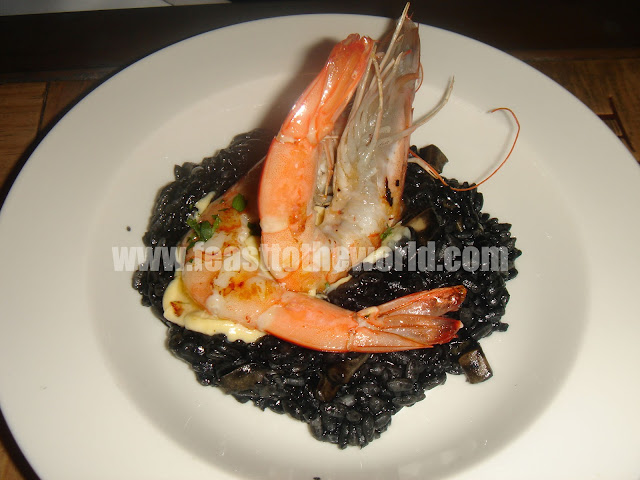 My starter of Butifara were just as good. Meaty spiced pork that's perfectly seasoned and grilled, served with a flavoursome white beans stew and the addition of wild garlic provided a subtle garlicky fragrant. 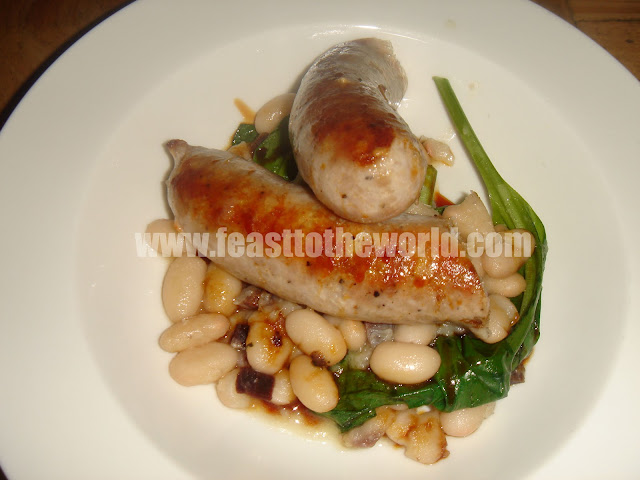 It was around this time that my train of thought was disturbed by a couple of diner who were leaving.

'Thank you ever so much, have a lovely Easter. How do you say happy Easter in Spanish?' asked the female diner to the waitress as she made her way to the exit

' I don't know, I'm Italian.' was the replied, with a friendly smile.

Such politeness , I thought just as our mains were laid before us. The salt cod were beautifully cooked, pleasantly resilient, not overly salty. The spicy smokiness of the chorizo is offset by the earthy white bean stew in a sweet concentrated broth. 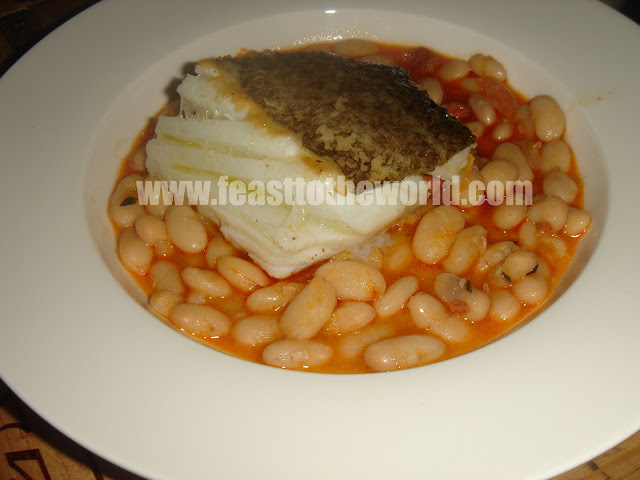 The hake was pan-fried to perfection. Wonderful white meat that flakes with the touch of a fork, delicate and juicy. The sweet and salty clams were juicy and flavoured with the wine they were cooked in. The roasted new potatoes and the al dente chargrilled purple sprouting broccoli were perfect accompaniment to the fish.

'How was it?' asked the matre'd as she cleared our plates.

'Very, very good. I love the broccoli. I hate it when vegetables are over cooked but that was superb!'

'Yes, it is very good,' she replied and within minutes, brought over the pudding menu. 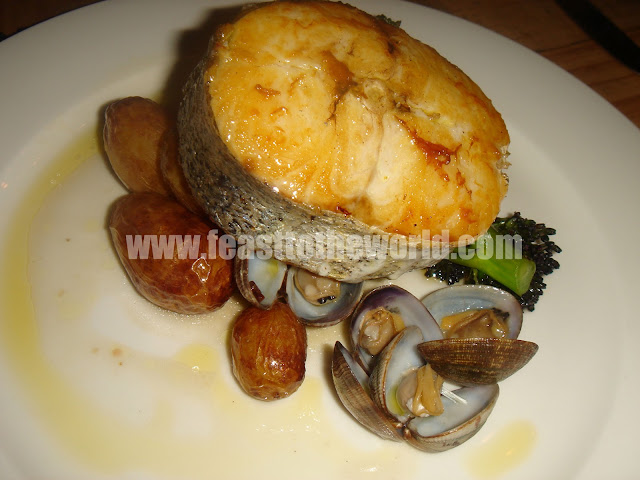 We both ordered the Santiago cake and in addition, I ordered a glass of Brandy de Jerez Amerigo Vespucci to finish things off nicely. The santiago cake arrived with a quenelle of cinnamon ice cream. The perfumed cake was full of citrus fragrant, rich and moist and yet managed to retain a touch of lightness. The toasted almond gave a slight crunchy texture and the cinnamon ice cream was perfect when eaten with the cake. Even the sherry seemed to go down very well, sweet, robust with a caramel undertone. 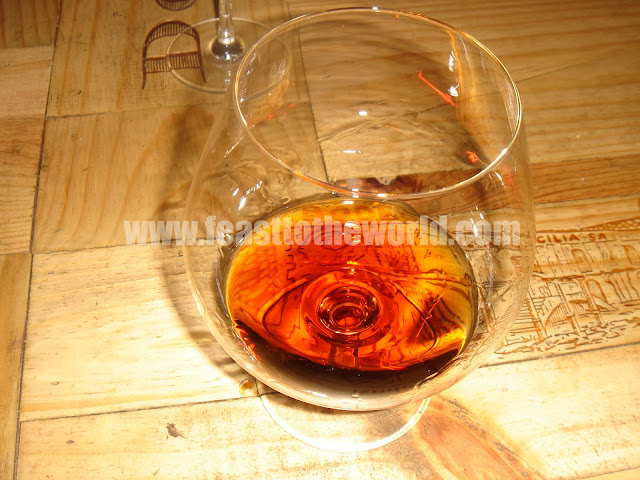 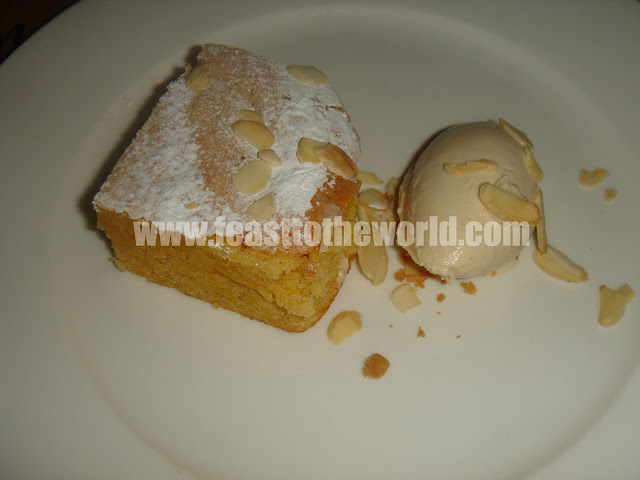 The portion of all the courses were generous and the cooking were simple but well executed. There were no complicated and unnecessary techniques. Just good, seasonal and fresh ingredients that's been carefully cooked with love. And just like in José, the compact menu changes according to what's in season which is just so refreshing to see.

(Our bill came to £88, with three courses, a bottle of wine, a glass of brandy and lots of affable service)

Posted by J@Feasttotheworld at Saturday, April 07, 2012