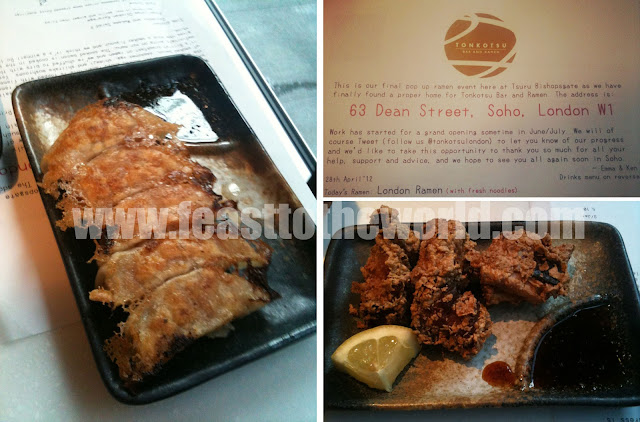 Over the past six months or so, Tonkotsu (of Turu Sushi) held a series of ramen pop up events at their Bishopgate branch attended by all the ramen aficionados like myself. Like all good things, this has finally came to end and what a spectacular ending this was.

Since the last Classic Shoyu ramen event, I have been waiting anxiously with bated breath to find out what their house ramen will be. Upon arriving and once seated, it was finally revealed to us that it will be their own take on the traditional English breakfast in a slat based ramen. That sounded exciting and since all classic ramen were named after the city they were from so London ramen just seemed like an appropriate choice.

The crispy kara-age were juicy and moist as usual, great flavours and I am delighted to see that the standards of this had been very consistent over our past few visits as were the pork gyoza. They were both excellent and  perfect starters to the meal. 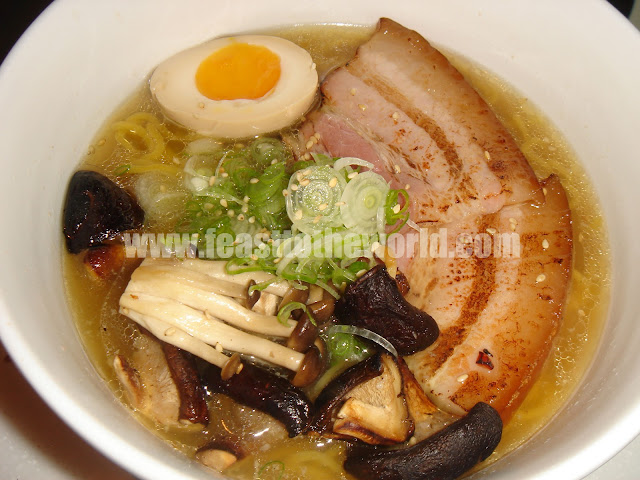 The London ramen arrived once our starters were cleared, bringing with it a whiff of intense smokey bacon aroma, which was rather comforting on a cold rainy day.

Adorned with three slices of flamed-charred smoked bacon, a soft curd-like egg with oozy yolk, some woody shimeji, lightly pan-fried shiitake, spring onions and sesame seeds. The clarity of the soup base masked the punchy flavours hidden within, a result of cooking the smoked bacon in the soup stock first. There was a dirty taste about the soup, not dissimilar to a  classic Tonkotsu ramen but without the cloudy, milky-white appearance. The bacon were tender and packed full of toothsomeness. The searing of the shiitake before adding to the ramen was a clever touch - adding charred flavour and fantastic texture. It was very well done indeed. This, we were told will definitely be on the menu of the restaurant and deservedly so - A big smokey ramen in honour of 'The Big Smoke'

Another news announced on the day was the Tonkotsu has finally found a home (hurrah!) and it will be residing in Soho, 63, Dean street opening in June/July. We were told that this was all very recent and that the contract was only finalised a couple of weeks ago, so good news for all ramen lovers in London.

The ramen world has had the Tokyo, Hokkaido and Tonkotsu and now it has London ramen, or as I prefer, The Big Smoke.

Review of the Tokyo Spicy Ramen can be view here

Review of the Seafood Ramen can be view here

Review of the Classic Shoyu Ramen can be view here
Posted by J@Feasttotheworld at Sunday, April 29, 2012