On The King's Boulevard - Eat Street at King's Cross : Eat My Pies and Kimchi Cult 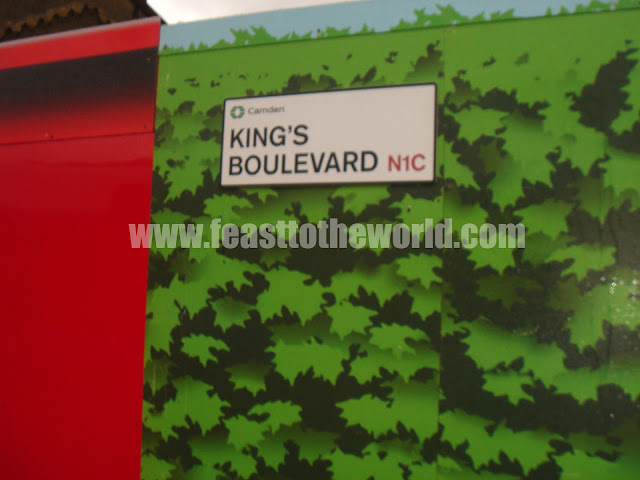 After being on my mind for what seems like forever, I've finally had the opportunity to pop down to the Eat Street down by King's Cross for a light lunch. 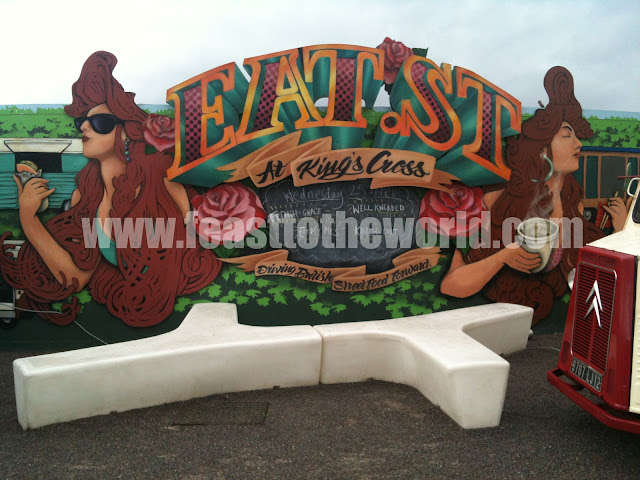 Eat street comprises of a group of street food vendors that have settled on one end of the King's Boulevard, sandwiched in between Pancras Road and Goods Way. Running weekly from Tuesday to Friday, different traders rotates and set up their stalls on varies days. These ranges from the delicious Hot Dogs from Big Apple Hot Dogs to the scrumptios Vietnamese Bahm Mi from Bahn Mi 11. Each traders have been carefully considered and only the very best were showcased which is what made this such a superb collective and regardless of what day you visit, there will only be good quality food served by traders who are passionate about their work.

On arrival to King's Cross station via the Victoria line, I gallantly braved the pouring rain and made my way to this street food collective venue. There were already a handful of street food enthusiast who, like me, ignored the dreary April shower in a quest for good street food. 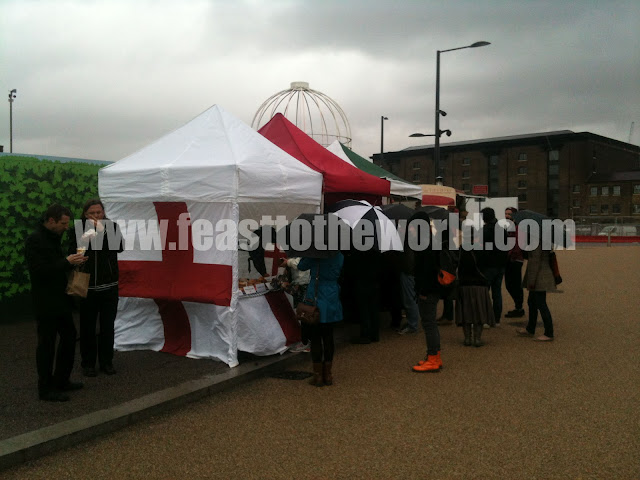 On the day I visited, there were four stalls on the premises - French and Grace, Well Kneaded Ltd, Kimchi Cult and Eat My Pies. After a brisk walk along all the stalls, they all looked mighty fine and alluring. 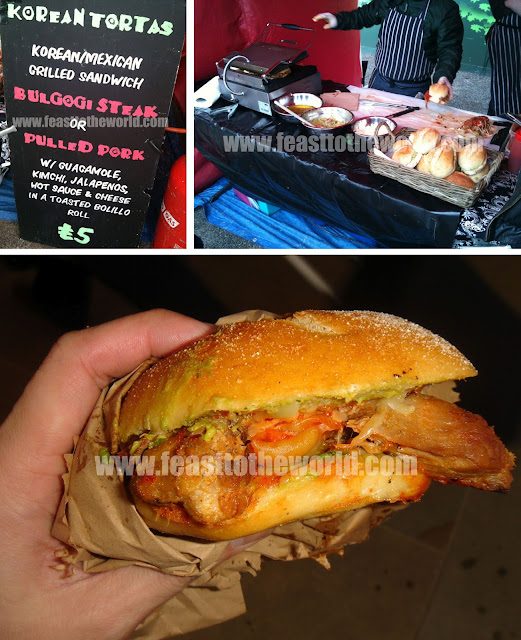 From my last encounter with Danny of Kimchi cult, he was top on my list as I simply had to try out the Mexican-Korean Torta that he had spoken of. Once stood in front of the stall, the aroma of the meat grilling on the sizzler were just sensational. Still the same old amiable self, Danny were doing his thing and chatting to the customers at the same time. His helper took the order and assemble the tortas. There were a choice of either Bulgogi beef or pulled pork (£5) and I went for the latter.  Nice chunks of pork that were not only moist, but also beautifully tender; with the unusual pairing of guacamole and spicy kimchi (it worked!) and together the jalepenos and oozy cheese all encased in a traditional Mexican Boulillo bread. These were then toasted with a panini presser which gave the torta a contrasting crunchy crust. Without a doubt was one of the best sandwiches I have had in yonks and I might even go as far as to say that it was even better than his Kimchi Cult Special. Thumbs up from me! 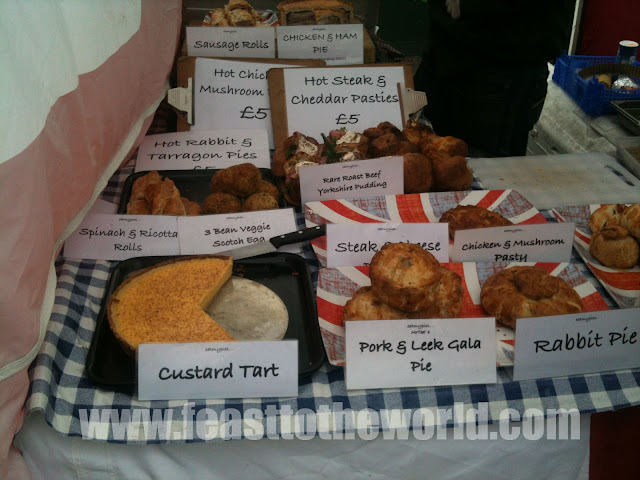 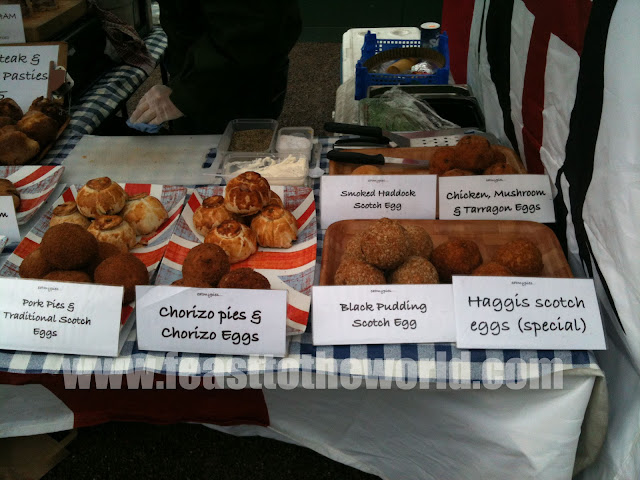 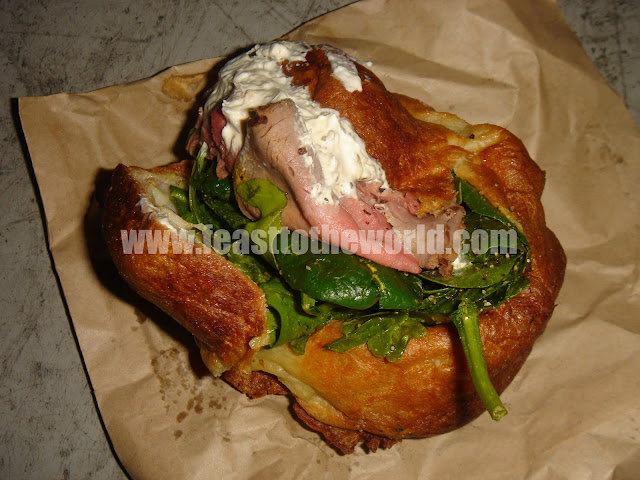 Another stall that I tried was the Eat My Pies. I was mesmerised by the arrays of pies, scotch eggs and the solitary custard tart on display. But what really caught my eye was the clever and inventive giant Yorkshire pudding filled with rare beef. I happily handed over £3.50 and was given one of those magical Yorkie.
It might not be the most conventional way to serve Sunday lunch but by gosh, what a treat that was. The beef was tender with just enough pinkness. The fresh horseradish cream and the peppery rocket provided a nice kick to the ensemble. The Yorshire pudding itself was light although being served cold meant that it had none of the crispiness, although it does remind me of a brioche-like texture which was lovely once you get past the notion of eating a cold Yorkie.

Sad to say, I was too full up to be able to try out the other vendors but maybe next time when I'm near King's Cross again, this will definitely be my top choice for a nice spot of lunch.

For more information on Eat Street, you can go to their website by clicking on the link or follow their progress via twitter @EatStreet .
Posted by J@Feasttotheworld at Friday, April 27, 2012