A Pickle With Your Burger ? - Kimchi Cult, E17 Walthamstow Market 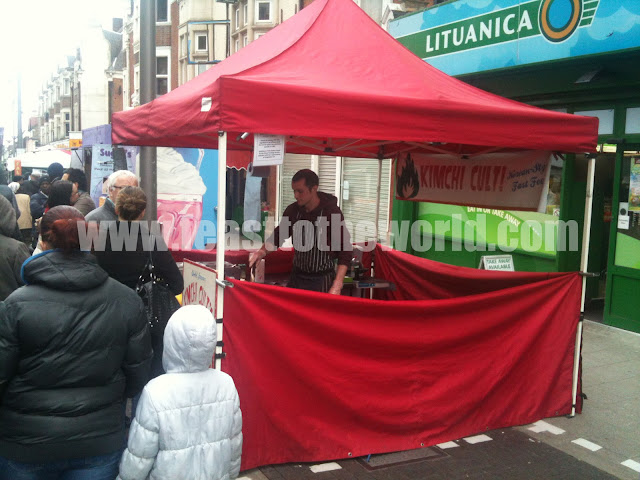 I came to know about the Kimchi Cult from an article I've read recently on the Metro (that same article also led me to another great street food discovery - Big Apple Hot Dogs) Since then, I have been following Danny on the twitter due to sheer fascination of his fusion Korean Kimchi and beef burger concoction. So when I read on a tweet a few days ago that he was setting up a Saturday stall in Walthamstow Market, I decided to give Maltby street market a miss and pay him a visit instead.

Off I went to the bus stop and soon enough,  I arrived at Walthamstow bus station. Once I've got my bearing about the place, I headed toward the market where Kimchi Cult had set up a stall. Through the long and buzzing market, I eventually found the stall, tucked away in the quiet end of the street. 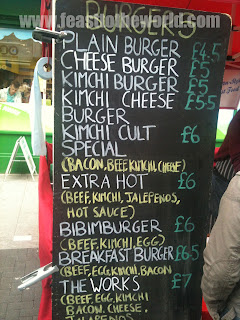 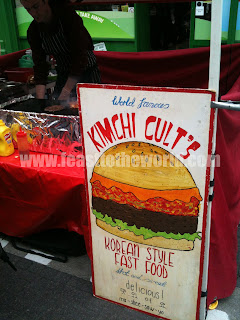 After scrutinising the menu for a moment, I ordered the Kimchi Cult Special which contained bacon, beef, kimchi and cheese. Then I waited patiently for it to be prepared before my very eyes, the perks of street food. I started chatting to Danny, who was amiable and knowledgeable about food.

It appeared that after two years spent in Korea, he fell in love with Korean cuisine and therefore decided to set up this unique burger venture. The beef patties were made from quality prime cut and the kimchi were homemade too, he'd even gave me advice on the best way to prevent an exploding fermented kimchi situation.

'Did you put yours in a kilner jar? I put mine in a plastic tub as it has more gives,' he suggested.

We then went on to talk about Singaporean and Malaysian street food and a lack of popularity of Korean food in London food scene. 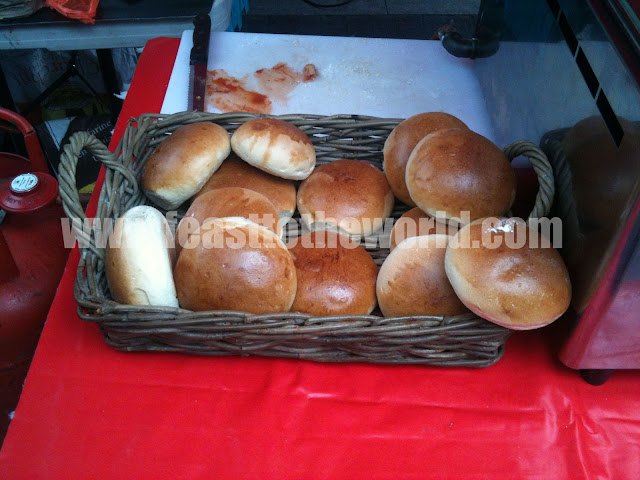 So how was the burger, you are probably wondering by now. It was absolutely delicious. The beef were perfectly cooked. It's smoky, obviously benefited from being cooked on the sizzling hot outdoor grill and were moist and well seasoned. Then there was the oozy cheese that enveloped the beef patty like a smooth velvety blanket of creaminess; the surprised hit was definitely the unique addition of the Korean fermented cabbage, Kimchi. It contributed a spicy and sharp kick to the burger, simply tantalising. What a great idea, and why not? It worked! The buns were freshly baked from a reliable baker, which explained the light and airy texture, unlike most shop bought inferior version. 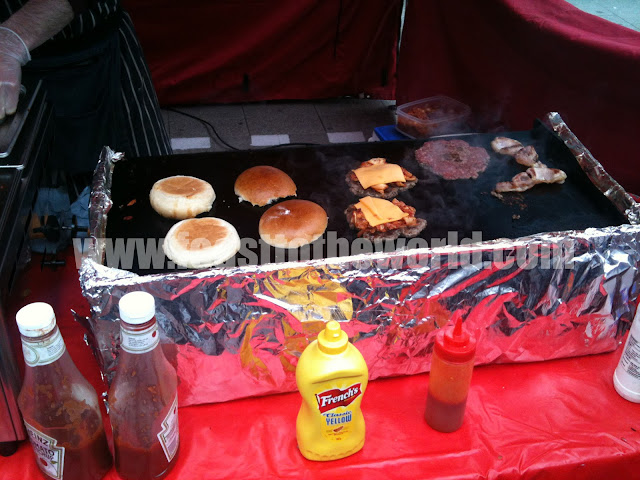 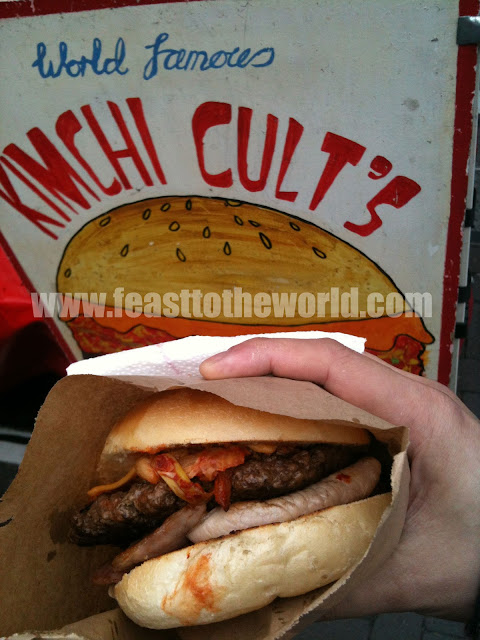 I think this is without a doubt another great street food discovery. One admirable trait about Danny is that he is truly passionate about what he does which I sensed from the conversation that we had and he is constantly coming up with new ideas to improve his menu. He serves Mexican-Korean fusion Torta on Wednesday at EAT.st in King's Cross - fresh baguette filled with Korean BBQ Bulgogi, guacamole and of course the namesake kimchi - another inventive combination which I am determined to try soon.

'I believe that good food should not be just for the rich, and I want to show that you can still eat very well without spending a lot of money.' These were the parting words from Danny and I must say I agree with him wholeheartedly on this.

For a more recent review on Kimchi Cult's Torta on Eat.St, click here

For more information on the movement of Danny's Kimchi Cult, follow him on twitter @kimchicult .
Posted by J@Feasttotheworld at Wednesday, April 11, 2012