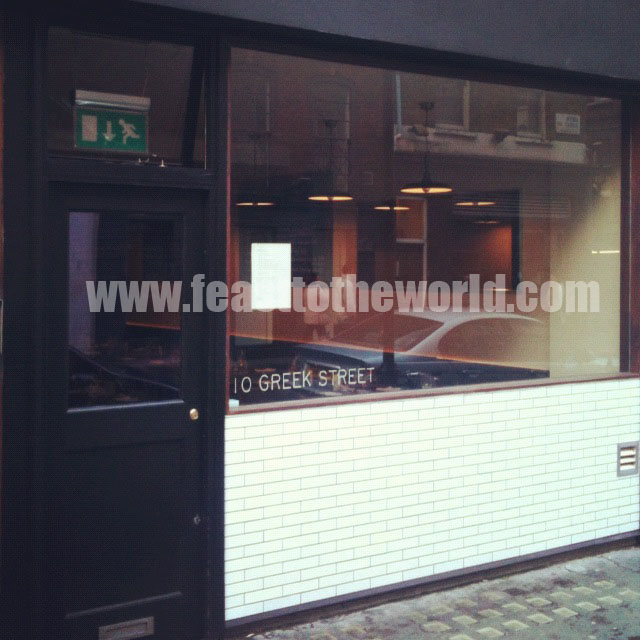 After a recent nightshift at work, and in a state of recovery, M and I decided to pay a visit to 10 Greek Street - a restaurant that has been on my to-go list for some time. Being one of those frustratingly trendy no-booking policy restaurants, we didn't want to take our chance and decided to aim to be there around 5.30pm when it opens for dinner service.

From the outside, it looked very unassuming and unexciting. Clean, clinical white tiles with a massive tinted window. If you don't pay attention, it could be very easily missed. Through the black door, the interior doesn't changed much. Magnolia walls with black tables and pine furniture, this has a retro minimalist austere plain style written all over, very linear and basic. Menu were inscribed onto giant black boards hung on the walls. The open kitchen is situated at the back, over looking by a counter, felt spacious and bright. Being a sucker for open kitchen, this hit the right spot for me. 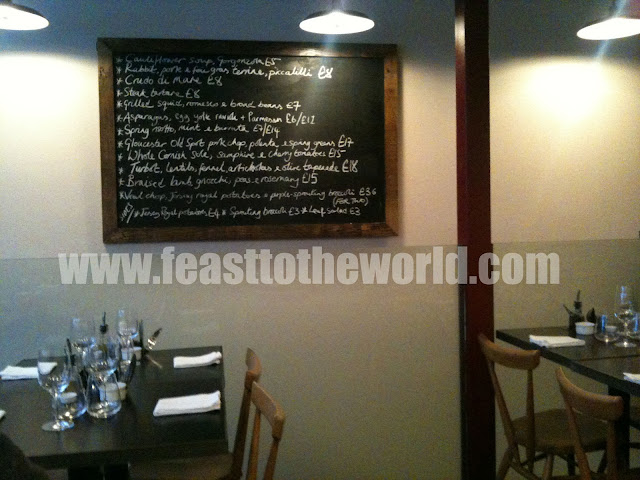 Being one of the few early diners at the premises, we were sat down very quickly. After a swift scrutiny at the menu, which was not easy as everything sounds delicious and there wasn't a clear defined starter or main choices. We settled for the asparagus and grilled squids for starters; and the veal chops for two for mains. 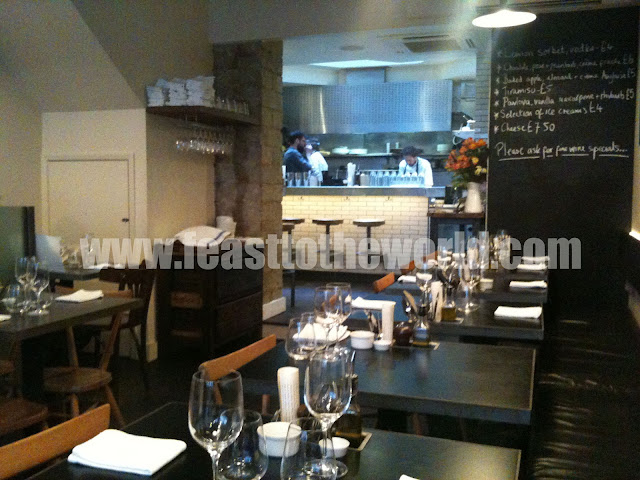 While waiting for the starters, the waiter brought over our wine and some freshly baked caramelised onions foccacia and some multi-seeds brown bread, both were superb and fresh to say the least. Pretty soon, the entire room were filled up, good thing that we arrived early. Although they do have an excellent system here of taking down the mobile numbers of the latecomers, send them away free to wander or for a drink in the nearby pub and ring them once a table is vacant, splendid idea. 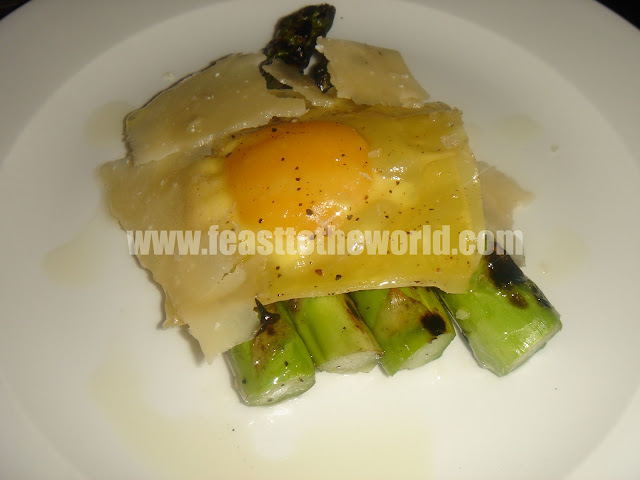 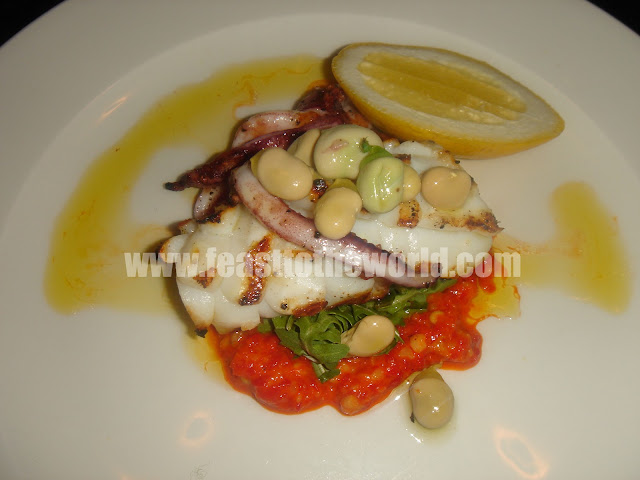 The starters duly arrived. Perfectly grilled seasonal asparagus(£6) were tender with a bite, accompanied by a wafer thin ravioli which oozed with runny egg yolk a subtle hint of truffle oil, it was excellent. The grilled squid (£7) too were fresh and well executed. Often, squid can be a bit tough and chewy when done badly but not here. It was exceptionally tender and reminiscent of a stellar sashimi. Along with a sweet, punchy romesco sauce and in season broad beans were for me the dish of the day. 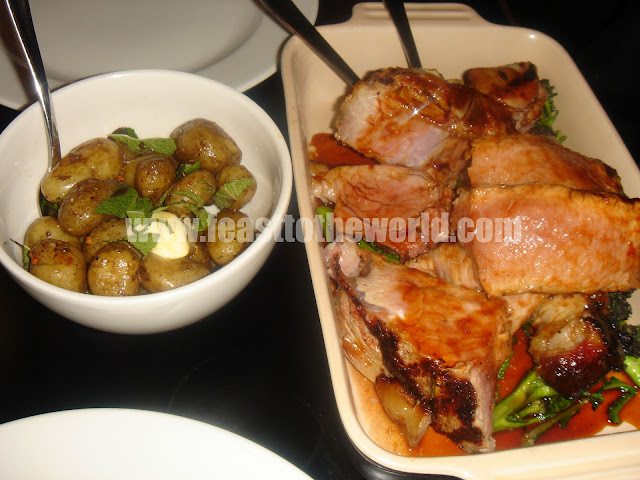 The veal chop (£32) of a giant proportion arrived looking quite intimidating. The sheer size portion for two were unbelievably huge (not that I was complaining as I was starving having not eaten anything for the past 20 hours or so). The veal was beautifully cooked, pink and juicy with a richly flavoured jus. Yet again, teamed with some much welcomed seasonal produce of purple sprouting broccoli and minted Jersey Royal  potatoes (which I adore). 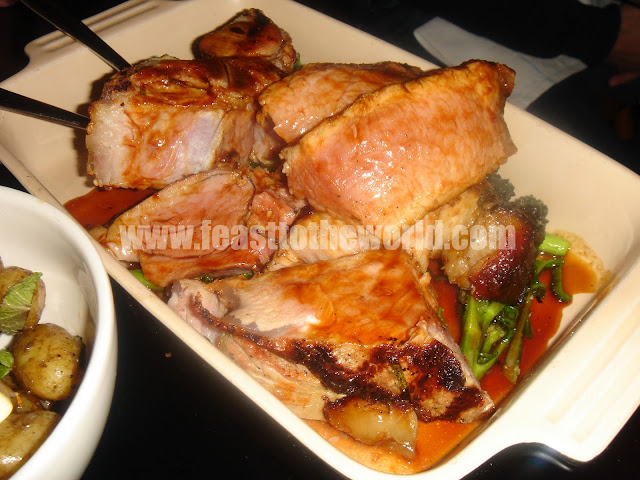 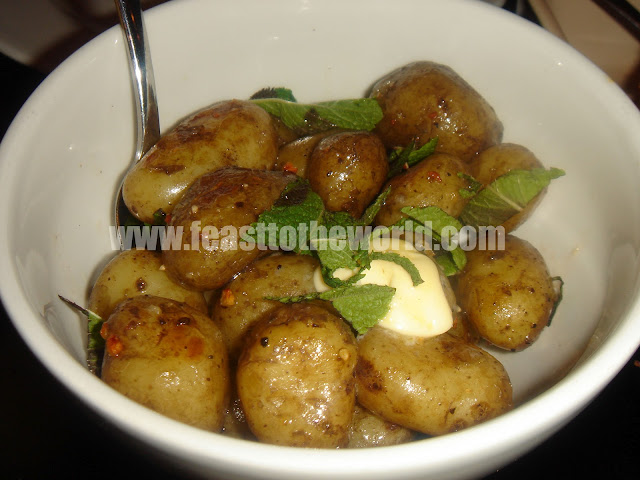 The pavlova, vanilla mascapone and rhubarb (£5) was good - crunchy on the outside and chewy on the inside just as it should be - and the sweetness nicely balanced by the tangy rhubarb. The chocolate, pear and pecan tart was, however, a tad disappointing. It was dry and the tart base was absolutely tasteless and bland. What clearly was a very good quality chocolate has been badly let down by the execution, not even the creme fraiche could savage it from it's draughtiness. And to further prove the point, M, who is a pudding lover, didn't even finish the tart and that is a bad sign. 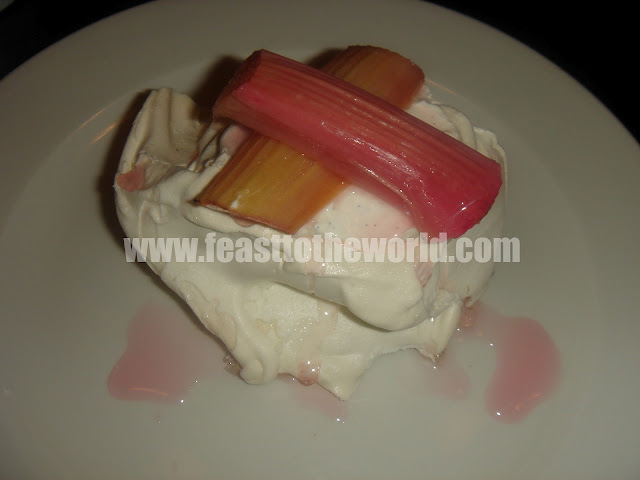 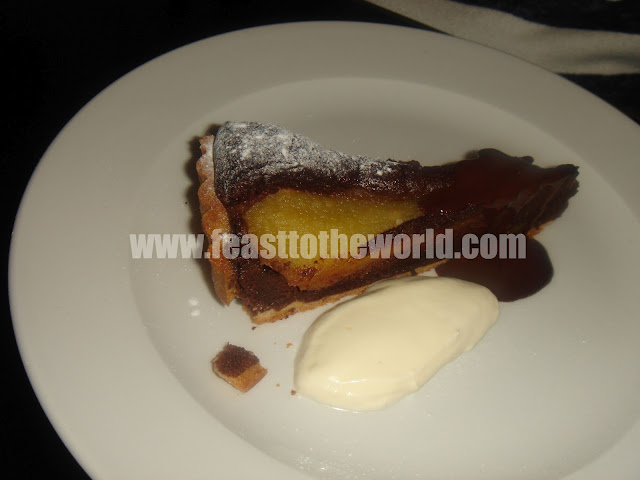 It take a great chef to be able to exercise restraints and to allow the ingredients to speak for themselves. All the dishes focused on the top notch quality ingredients and were very simply but well cooked. It has to be said too that that everything was reasonably priced and they did not skimmed on their portions. We were both very well fed and also, the excellent and friendly service of the all-male staff (this pointed out to me by M during our meal as it is rather unusual).

Our meal came to a total of £83 with a bottle of wine.

Posted by J@Feasttotheworld at Saturday, April 21, 2012