Ever since I started to get into the whole supper club movement and culture. I have been doing my fair share of research, like you do, coming up with a list of my must-go supper clubs. As fan of my blog will know, Japanese cuisine is a firm favourite of mine. I love the simplicity and how it all revolved around good quality ingredients and mild delicate flavours so it comes to no surprise that  Japanese Home Cooking Supperclub by Luiz of The London Foodie was on the top of my list.

Luiz quit his high flying career a couple of years ago, went to Japan to learn authentic Japanese cooking and is now studying at the Le Cordon Bleu. I was ecstatic when I was offered a space at the recent night due to a last minute cancellation. So off I went to Islington, brimful of anticipation. I have read good things about his culinary skills and after hearing the stamp of approval from Hana of PomPomTakoyaki, I was expecting great things. 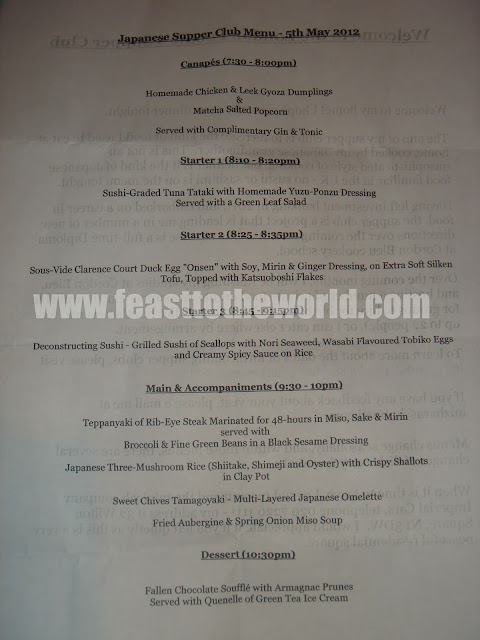 The night started with a cosy Gin and Tonic session in the living room and all the diners were mingling while being offered some delectable canapé of Matcha (Green tea) Salted popcorn and Gyoza. Being not a fan of pop corn myself, although I thought it was inventive, wasn't really to my taste. The gyoza however, was right up my street. Packed with juicy chicken and leek encased in a crispy casing, along with the light drizzle of dressing and scattering of benishoga (pickled red ginger), were little morsels of delight.

We were then led down to the dining room. The two long tables were immaculately set up, in no way inferior to a fine dining restaurant. We were greeted by the friendly and welcoming host/chef himself. Once seated, Luiz gave a thorough introduction to the night's event and menu. The menu sounded like something that you will only get in a Michelin starred restaurant and was impressive. With that, he left us and back to his beautiful open kitchen to dish out the food.

The first of the many courses arrived swiftly. The beautifully plated Sushi-graded tuna were lightly seared and were simply divine. Fresh, tender and delicate with a sharp and aromatic yuzu-ponzu dressing.

Next came the "Onsen"(hot spring) Duck egg -  lightly poached in warm water bath (sous vide), served with a silken tofu and top with bonito flakes. The texture were just sensational. The egg white had the constancy of a smooth curd while the yolk were rich and gooey. The katsuoboshi(bonito flakes) added a subtle taste of the ocean to the fresh soy dressing. The dish of the day for me and definitely one of the best egg dishes I've ever had (I want a sous vide machine after that).

After that was the deconstructed sushi - meltingly tender pieces of raw scallops over some sushi rice blanketed with a creamy piquaint sauce. These were served on a scallop shell, lightly grilled, and were a beauty to look at. The wasabi-flavoured Tobiko Eggs (Flying fish roe) added another dimension of 'heat'. I loved it! It has a good kick without setting your mouth on fire.


After the whopping 3 course starter, there was a welcoming break. This allowed us to socialise and to get to know each other. It wasn't long before the tantalising smell of the sizzling sound and a sweet caramelised fragrant seeped from the kitchen over into the dining room.  Then there was the appearance of the massive nabe(clay pot) parked right in the middle of the table. Luiz lifted the lid to reveal the aromatic three mushrooms rice. To this, he add a liberal sprinkled of chopped spring onions and crispy shallots for contrasting textures and added flavours.

Along with the delicious perfumed rice were the Teppanyaki rib-eyes which were beautifully cook, pink in the middle, just the way I like it. The accompanying broccoli and green beans too, were brilliantly executed. As were the exquisitely presented sweet chives omelette (Tamagoyaki), not the easiest feat but he more than achieved it with pure gusto. The taste too were delicate, well seasoned and a pure joy to eat. The whole mains were rounded off nicely with an unctuous bowl of fried aubergine miso soup.

The pudding arrived with a rendition of 'Happy Birthday' to one of the dinner sat in the next table. Despite being not a great lover of pudding, I devoured the chocolate soufflé and matcha (green tea) ice cream and asked for seconds. The chocolate was of superb quality with a nice subtle bitterness which I adore and the refreshing green tea ice cream just complement it really well. And being not at all too sweet (which is the main reason for my pudding aversion), I enjoyed it immensely.


While this may not be some fancy restaurant, the food delivered throughout the night were of top notch quality. The superiority of Luiz's excellent culinary skills were without any doubt. Added to these were the thoughtful and attentive hosting who never failed to keep us in the loop of what we were eating as well as the history of each dishes.

The suggested contribution for the meal of £38 were a snip for what we were offered on the night, in terms of sheer amount of food and the superb cooking. If you've only ever decided to go to one supperclub, make this the one to be. I will definite be returning in the near future for more of Luiz's delicious fare.