Some Wolves Have All The Luck - Bocca Di Lupo, London W1 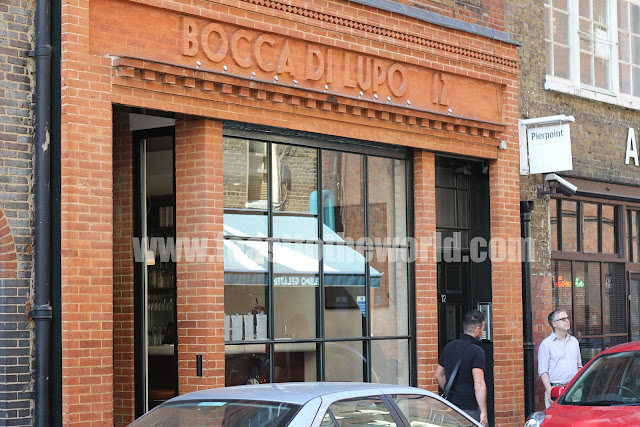 For our anniversary recently, M and I went for an Italian feast at Bocca di Lupo, which is situated on a back street in Soho. From the outside,  it stood out against the dreary run-down surroundings. With it's  terracotta bricks facade and giant window glass mounted by sleek black frames, it is both modern and visually refined. On the inside, there was a long bar counter by the window and situated at the back are table seating dining room area. We were given a choice and being an open kitchen enthusiast, I quickly jump at the chance at opting for the two seats by the counter nearest to the window which appeared to have the best view into the entire kitchen. 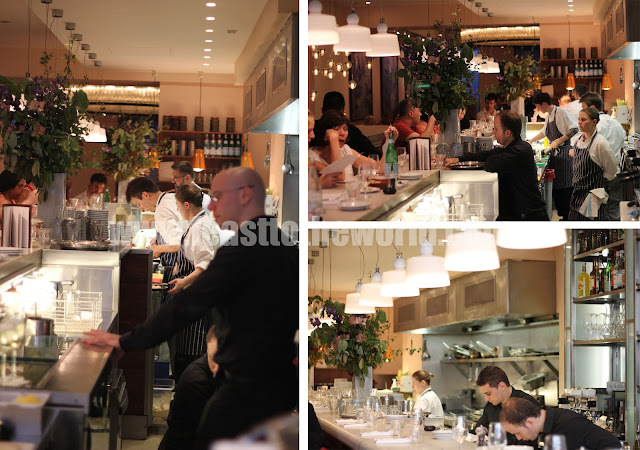 The decor were beautifully thought out, low hanging pendant lights adorned the entire stretch of sleek, marbled-top counter, only interrupted by giant vases of stunning floral arrangement. Spacious walkway, lit by a chandelier of little baubles and the surrounding white walls added to this charming and decidedly contemporary ambiance.

The menu consisted of a vast choices of diverse regional dishes from across Italy and the best thing was that they came in both small or large portion which was perfect for sharing and because there were so many options, we opted for a small selections of small portions.

Within minutes of ordering, both the wine and some perfectly baked plain and sweet caramelised onions foccacia bread appeared before us. Fresh as if it had just came straight out of the oven. We were in the perfect spot for watching the chef as he masterfully thinly sliced up some Lamb prosciutto (£9.50, Toscana) for our first order. These came with crunchy sweet raw broad beans and earthy but mild Pecorino rosso. From this point onwards, the rest of the order came thick and fast and very quickly filled up any existing table space that we have. Crescentine (£7, Bologna) - warm, puffed up, triangular fried flat bread, when paired with the wafer-thin and salty speck and the creamy squaqurone cheese were a blissful mouthful of joy. 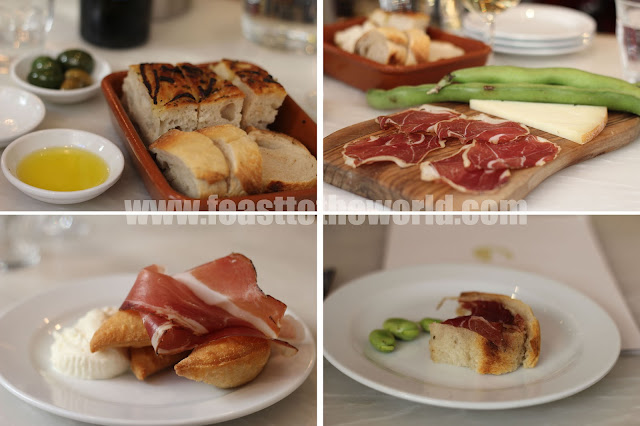 An appearance of the in-season grilled asparagus(£8, Emilia) adorned with the classic marriage of sweet balsamic and salty Parmesan, were a real treat (I am a huge fan of these green spears). The Parmigiana di melanzane (£7, Campania) - rich and intensely flavoured aubergines baked with sweet tomatoes and creamy mozzarella - were utterly delicious. It also had a sponge-like texture which makes it light and very moreish.

The plateful of fried cuttlefish, courgettes, artichokes and red prawns were so pile up that there war a few getaway attempts made by these battered delights. Both juicy and crunchy, the red shrimps were so good that I ate the whole thing, shell and all (ooops, was I not supposed to?) 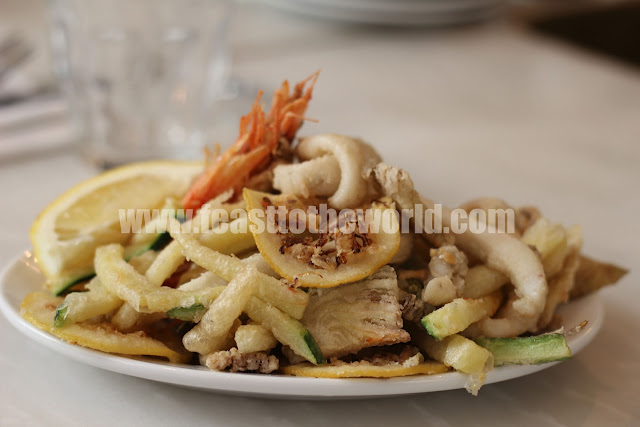 Both the braised octopus (£8.50, Molise) with peas, spring onion and basil and the Baby chard (£6.50, Liguria) were excellent but the magnificent Linguine with spider crab, tomatoes and basil was by far, the standout dish. The pasta was al dente and the sauce was rich and robust. Each delectable mouthful sent a wave of excitement that swept across the tastebud. Sweet juiciness of the tomatoes and the crab flesh were a fine match, absolutely perfect! 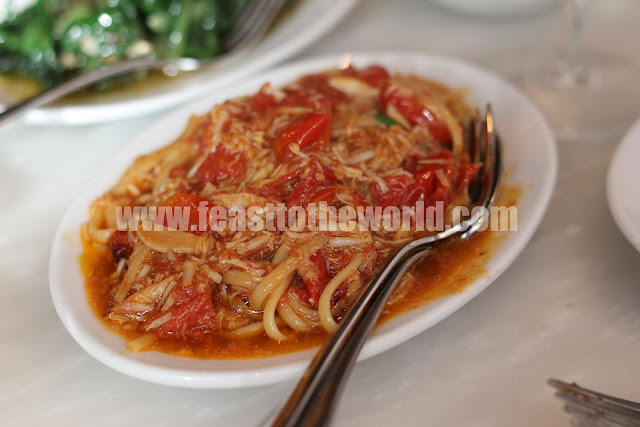 For the pudding, M opted for the Chocolate and marzipan ball with rum and raisins (£3, Erice) while I've gone for the more adventurous Sanguinaccio (£6, Calabria) - a sweet patê of pig's blood and chocolate on the amiable waiter's recommendation. The chocolate ball was a delightful bite size although M did complained that it was rather small; the pig's blood concoctions, as horrible as that sounds, was actually delicious. Rich, bitter chocolate, in a thick and almost creamy consistency from the blood; together with bits of candied orange and pine nuts were like a posh Nutella spread on the accompanying sourdough bread. It was definitely a brave attempt on my part for trying as well as the restaurant for serving this imaginative (unless it is a truly typical of its origin) pudding. I did not regret and will definielty be back for some more of those in the near future. M and I both agreed that the puddings served were one of the best we have had in a while. 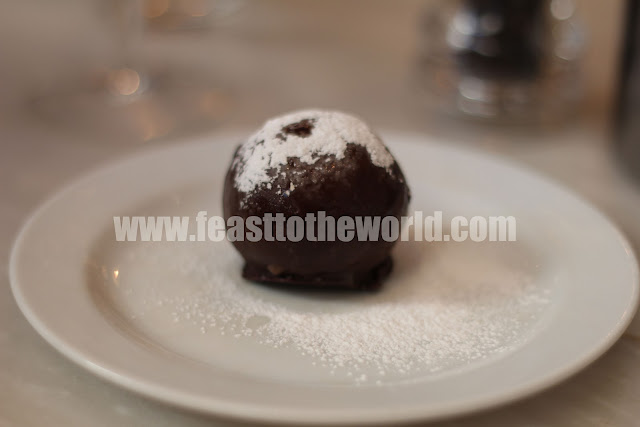 For celebrating a special occasion, this is without a doubt the perfect place for that. Sitting at the bar counter watching the chef worked their magic added a fascinating theatrical extravaganza which made this truly memorable. Together with the excellent food and amiable and attendtive staff, including the manager, who took very good care of us makes this a restaurant well deserved of it's singing praises from critics and bloggers alike.