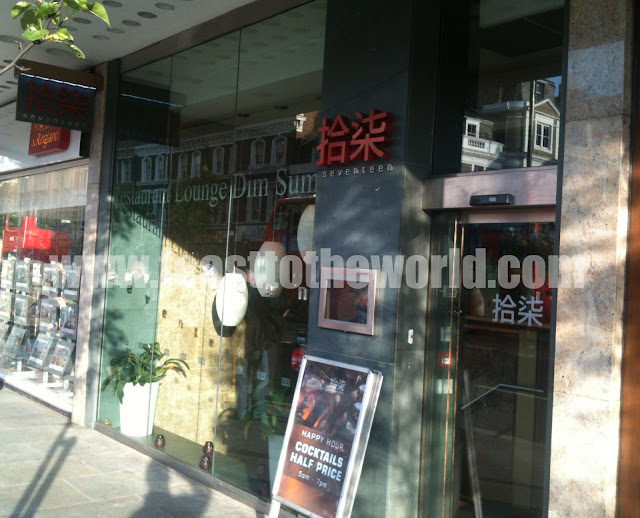 A few days ago, I was invited by Seventeen, Notting Hill to attend a blogger's event. This was to showcase a sample of what is on offer on the restaurant's menu. To be honest, I have no idea what to expect. After a number of bad experiences with some of the so-called authentic Chinese restaurants, I have given up the hope of ever being able to find one who will truly fulfil their claims. So it was with this apprehensive mind that I decided to give this restaurant a go.

Seventeen is located in the midst of trendy Notting Hill, not what I would called a typically oriental populated area. Arriving at the premises, I was greeted by the manager,  Mark and swiftly led downstairs to a semi-private dining area where I was introduced to the rest of the bloggers.

The restaurant were dimly lit with red and bluish glow. Carved wood partitions and chinoiserie design seat covers filled the room creating a modern ambience with traces of traditional oriental touches. After a brief conversation over a glass of bubbly and some nibbles (fried peanuts and blanched celery and carrots salad), the amiable manager, Mark gave us a brief history of the restaurant and some introduction on the Szechuan cuisine before the food were served. 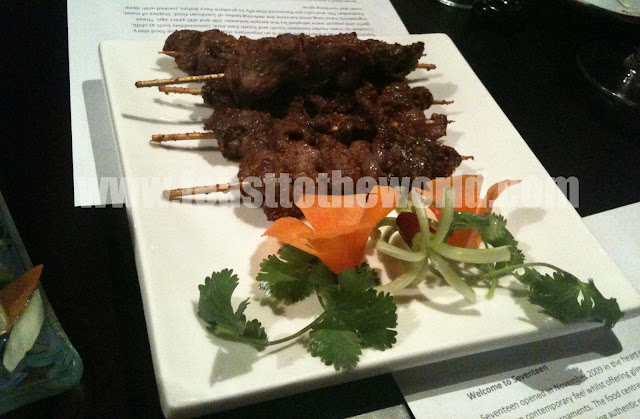 The feast started off with the lamb skewers, coated in cumin and chillies and lightly grilled.  The lamb were moist and full of flavours, and then you get a gradual spicy kick at the back of the throat. A tantalising start to the meal.

A strong whiff of fragrant aroma arrived into the room and with it, we were introduced to the next dish, Szechuan Style fish. A massive decorative bowlful of dried red chillies swimming in gallons of sizzling oil. Buried amongst the ocean of red jewels were tender pieces of fish. The chillies and the Szechuan peppercorns gently infused the velvety fish, the textures were simply beautiful and a joy to eat. 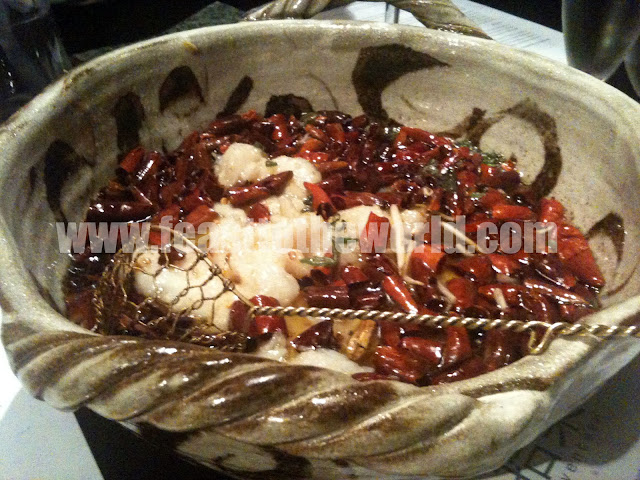 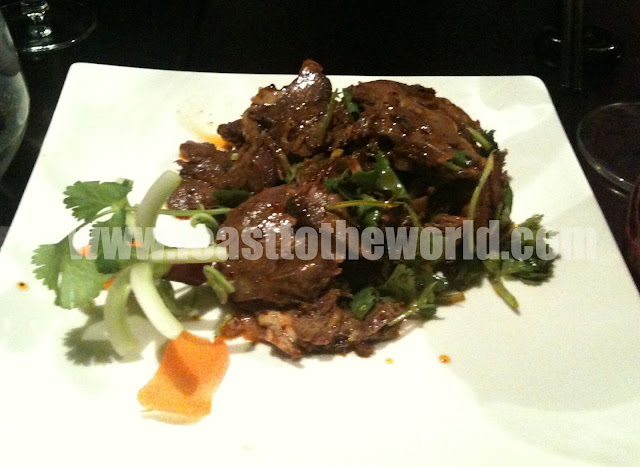 The beef shank in hot and spicy sauce were the star of the night. It was tender and had a melt-in-the-mouth textured, along with the potently spicy seasoning, which packed a whopping punch. I was rather glad that the dish was traditionally served cold. The room temperature meant the flavours of the chillies were fully appreciated rather than having to reach for glasses of water to down the fire. This was met with a universal seal of approval by fellow bloggers who were there too on the night.

The Chongqing Chicken, another cold dish, were just as delicious. Tender chicken that had been steamed, then seeped in a chili laden broth and flavoured with sesame seeds and oil. Another spicy delight that went down a treat. 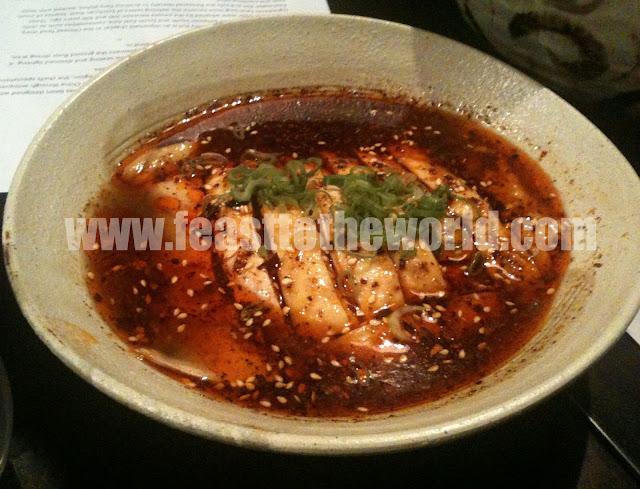 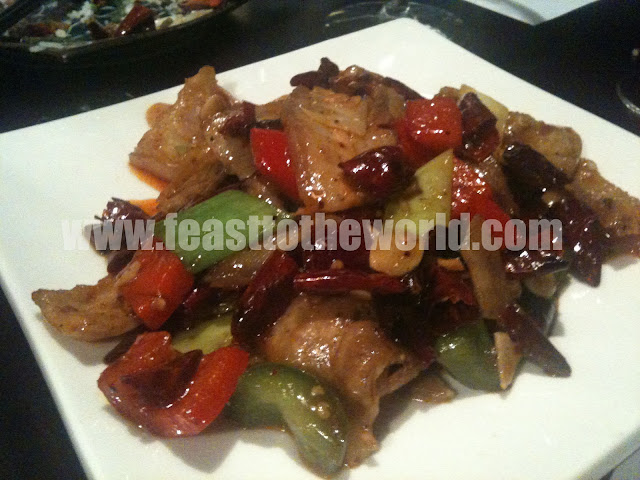 The twice-cooked pork belly was an authentic Szechuan dish worthy of inclusion to the repertoire. The pork were twice cooked first by boiling it in hot water and then stir fried with chilli, pepper and Shoaxing wine. It was beautifully seasoned. The Green beans with pork and the Choi sum with garlic were also cooked well, both greens were tender to the bite, just as it should. Very rarely would you get a dish that showcased the meat as a second fiddler to the vegetable and that's what the green beans dish has done here. The minced pork acted as a seasoning to the beans, giving it a deeper and richer taste which is altogether quite pleasing.

The whole meal were rounded off nicely with some mango jelly and delicious moachi - glutinous rice balls, filled with sesame paste and coated with crushed peanut. A welcome pot of tea also helped to ease the amount of chillies that were consumed on the night. 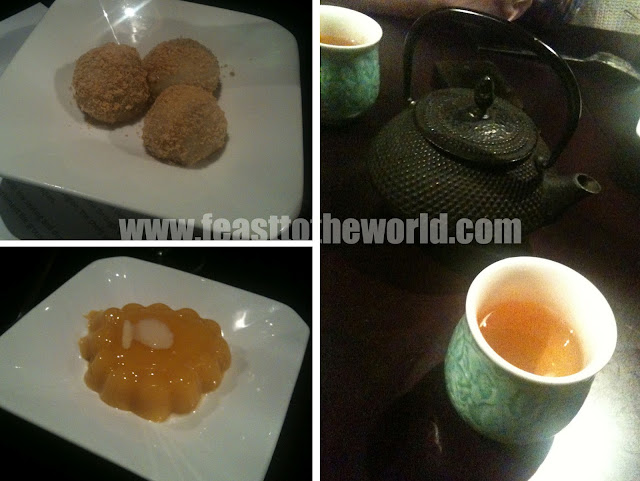 All in all, this was a genuinely good effort of trying to bring authentic Szechuan cuisine to the masses.  Although the invitation meant that the dinner was free but I could definitely see myself coming back for a paid meal in the near future, especially for that beef shank dish again. I would also like to mentioned the generous hospitality of our host on the night , Mark, the restaurant manager and his team who provided a friendly and attentive service which made it a very enjoyable night.

Note: I have unwittingly left my camera at work on the night so all photos were taken with my iPhone but fellow blogger Charlotte who was also present on the night took some beautiful photos. Go check it out!