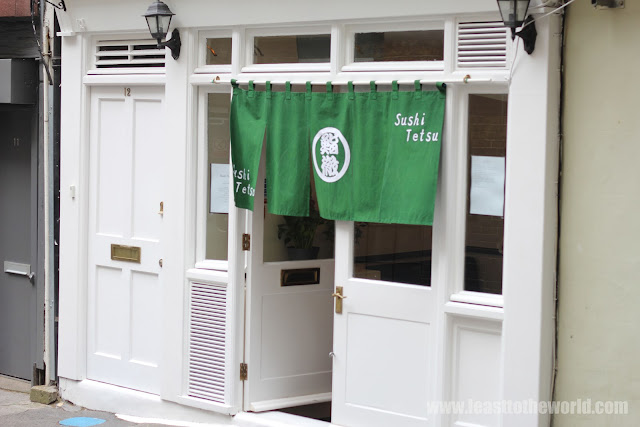 It's taken me a while to write this post, and it also taken me a long time to decide if I ought to share this true hidden gem. But I think Toru-san's skills and dedication should be spread further than amongst the circle of those who's in the know. So it with great pleasure and reluctant, I am posting this.

Tucked away in a little back alley, away from the main road of Clerkenwell is a traditional tiny little sushi-ya, run by the chef Toru Takahashi and his wife Harumi. Tiny is perhaps an understatement, it seats only 7 diners by the counter at any given time. There might be 2 tables available as an option for anyone after some privacy but why would you want to miss out on witnessing a display of art form that had taken years to mastered? It is because of this intimate environment, Toru-san was able to pay full attention to all his guests throughout the entire service. 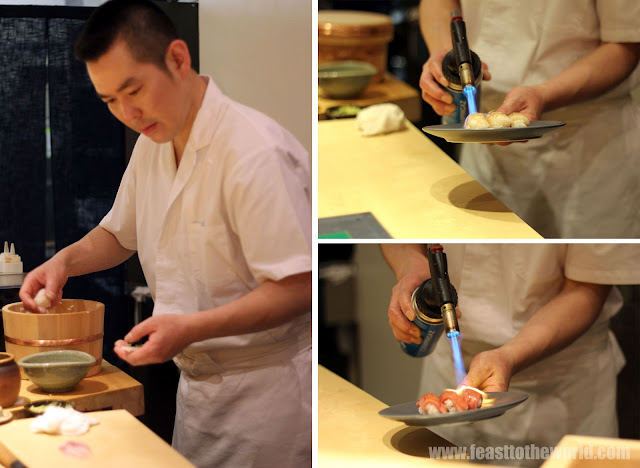 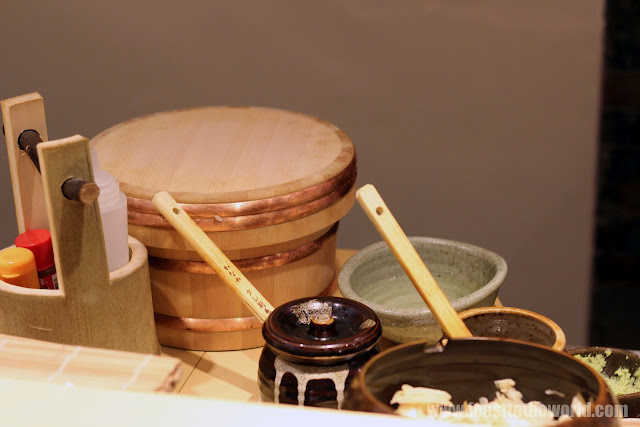 Toru-san started his career as an apprentice in Kobe and had previously worked in Nobu as a sushi chef for 5 years before leaving to set up his own restaurant. This sushi bar concentrates on only sushi and sashimi and by gosh what a pleasure it was to have such an establishment. All the fish available were freshly picked from Billingsgate Market on the day by a reliable source whom I'm told, 'always picked the good stuff'.

On the night that we visited,  my friends John, Goz and I decided to ask for the Omasake (up to the chef's recommendation) service. This was by far the best way to enjoy sushi as this allowed the Chef to have full control and served only what he knew was the best and the freshest pickings. Toru-san was brilliant at this and all the sushi that we had on the night were of top-notch quality and superbly prepared. Unlike some sushi chef who would just concentrate on slicing the sashimi and moulding the perfect nigiri sushi, Toru-san was also a born entertainer and a man of great humour. Throughout the service, he was great conversation companion and provided great in-depth information for any queries that we had. His wife, Harumi was just as amiable. The double act was also what marked this out to be just your normal run-of-the-mill sushi restaurant. Constant attention was also being paid to the diners, and any empty Sake glasses would be offered another without any hesitation. The service was absolutely spot-on.

All the fish were prepared from behind the counter and the arrays of top quality fillet were kept on display in his wooden box, glistening and shining in its full glory. 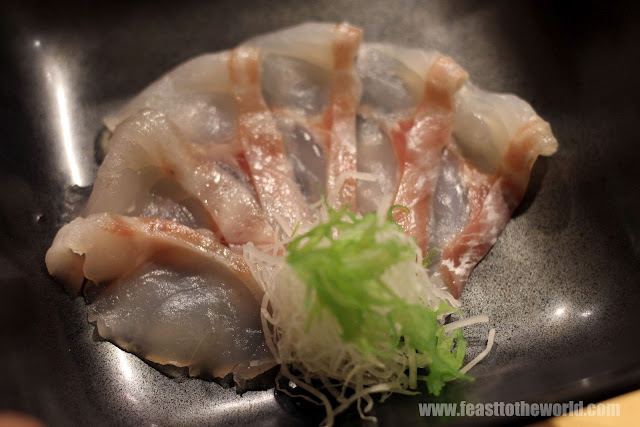 The first of the many dishes was the sea bass sashimi, served with a light ponzu sauce. The delicate flavour further emphasised on the freshness and it was a tantalising intro. 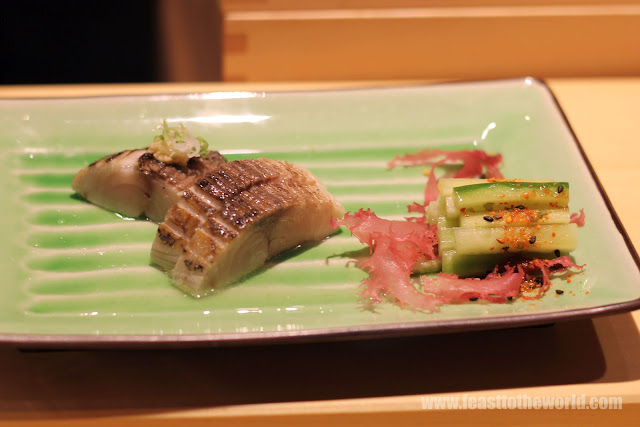 The mackerel were skinned, lightly scored and then flame-scorched with a blowtorch, giving a sweet charred taste to the clean-tasting fish. This was one of the many appearance of that amazing blowtorch that, in the hand of Toru-san, became a tool of creating many wonders. 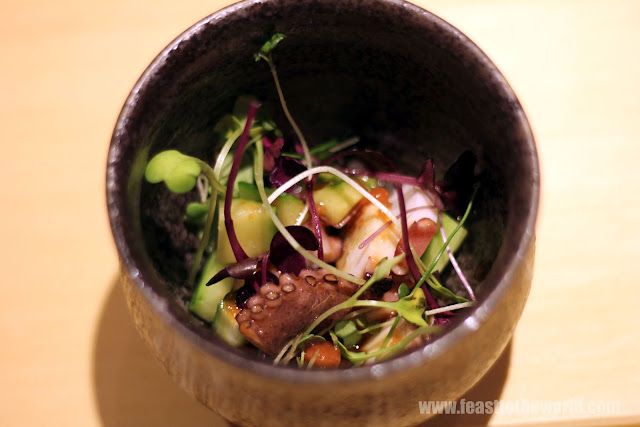 The octopus that had been massaged for 45 minutes before gently boiled and cooked were meltingly tender. The accompanying plum sauce gave a sweet, sharp and aromatic flavour that is just divine. 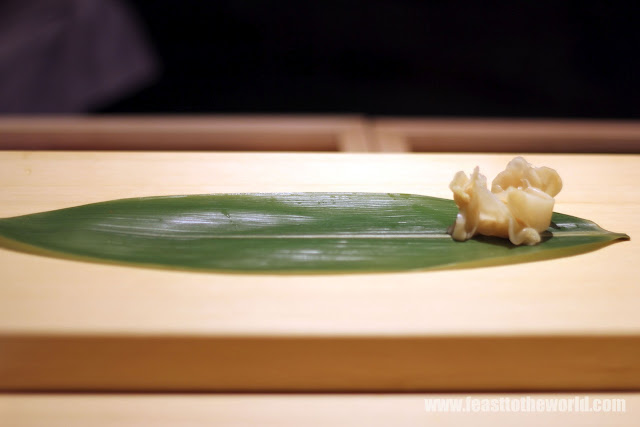 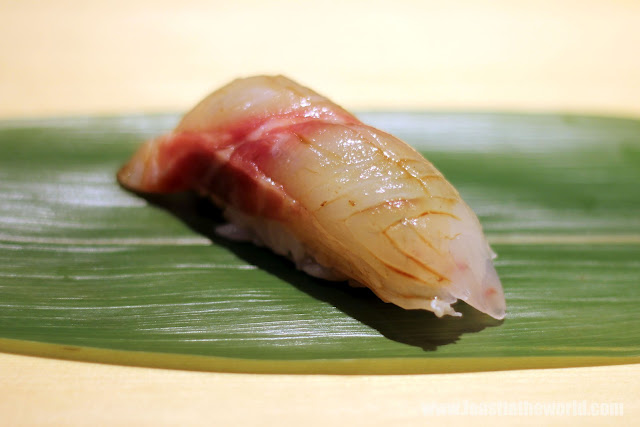 Once the bowls of octopus were cleared, a clean, damp sheet of bamboo leaf was laid before each of us and these would become our dining vessels for the rest of the evening. The sea bream were gently brushed with what was decribled by Toru-san as the 'secret' sauce and moulded over a small handful of lightly vinegared sushi rice. The balanced was just right. The sauce was delicately sweet and salty, complimented the sweet sea bream and allowing the quality to shine through. 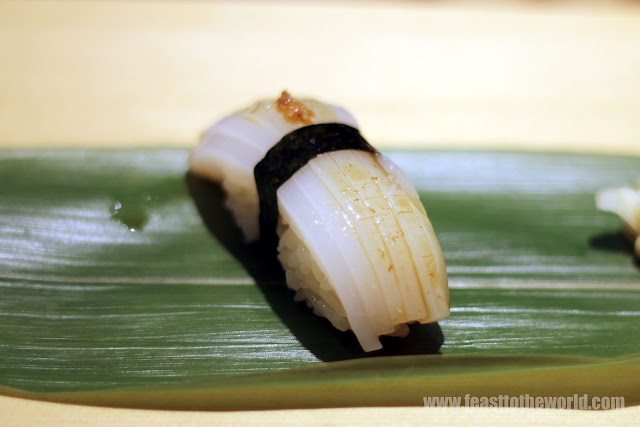 Another beautiful piece of sushi, the squid were lightly scored and once again brushed with that 'secret' sauce, another fine specimen and it just was a revelation to see how soft and meltingly tender squid can be when served this fresh. 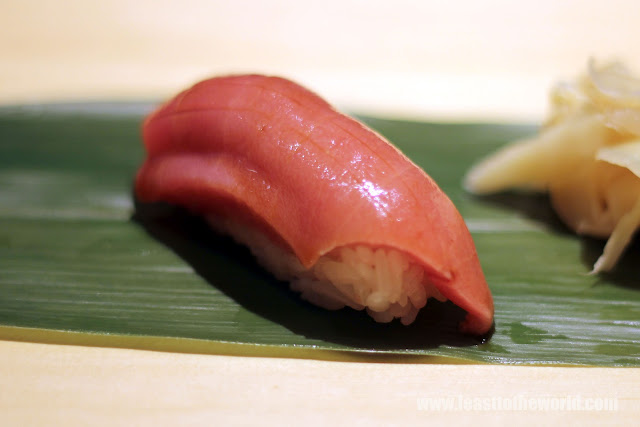 Chu-toro, a medium fat tuna was definitely by far the best sushi that I have ever put into my mouth, with no effort required, it just melted and dissolved like a velvety smooth ice cream. 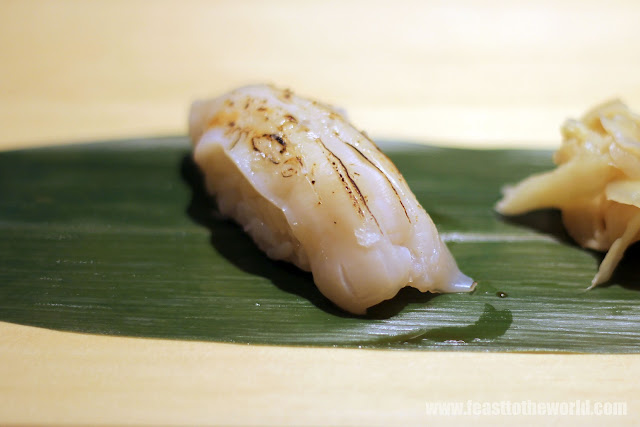 Next was the flame-scorched squid served with a squeeze of lime and a sprinkled of sea salt. This presented a taste completely different to the previous squid sushi. The charred flavour gave an earthy robust taste,offset by the sharpness of the lime and then gave way to the salty flakes. It tickled every taste buds in the short timespan of a few seconds. 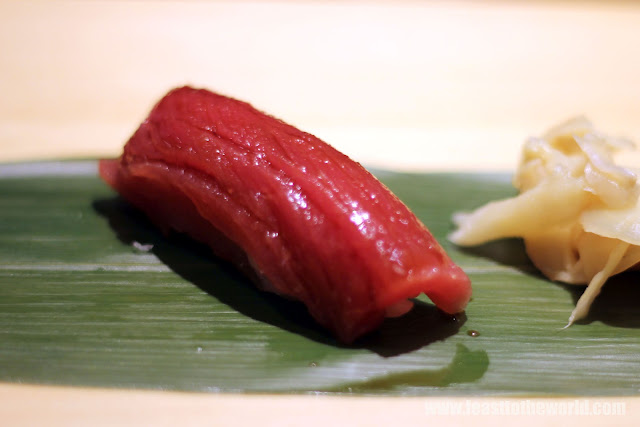 The glorious ruby-red Akami or lean tuna was sweet, juicy and just as tender even without the fattiness. 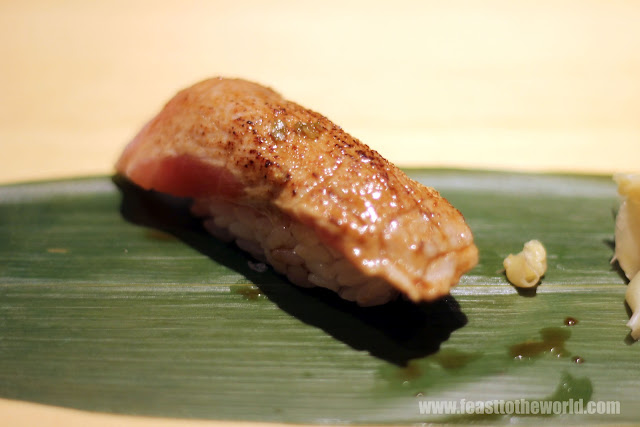 Otoro (tuna belly) was craftily flame-scorched with that wonder tool of his and resulted in a slightly beefy, rich and succulent piece of sushi. 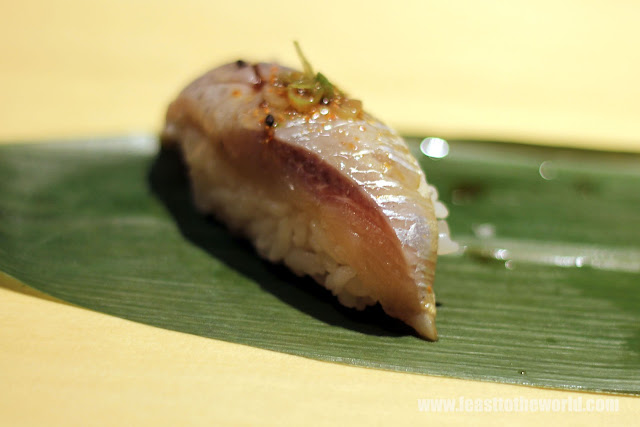 Next on the menu was the sardine, so fresh that it smell of nothing but the ocean and tasted wonderful sweet and delicate with hint of saltiness from the adorning flying fish roe. 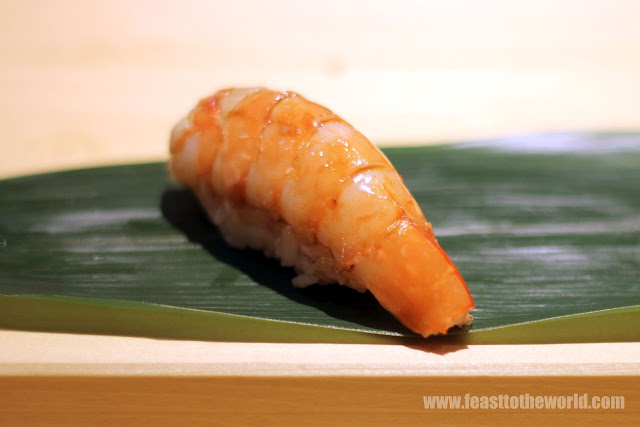 Jumbo prawn was lightly flame-grilled on the belly before moulded onto the rice and brushed with the 'secret' sauce. It was decidedly sweet and has a rather intensive saltiness within. 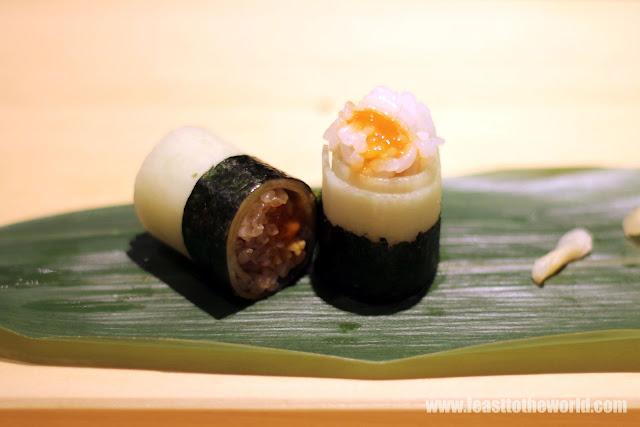 Next came Toru-san's very own creation. I don't want to give his secrets away so instead of giving you a description, all I can say is that this sea urchin roll was absolutely delicious. 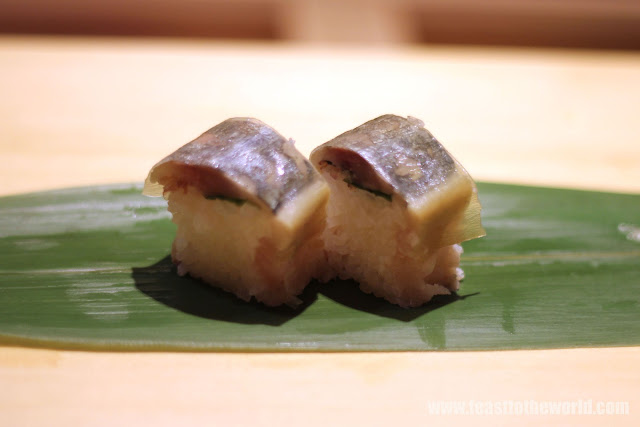 Horse mackerel was done in an inside out style, the cured Saba was sliced open, lined with Shiso leaves and pickled onions and wrapped over some rice. These were then layer with thin kombu sheet and was a delectable mouthful. 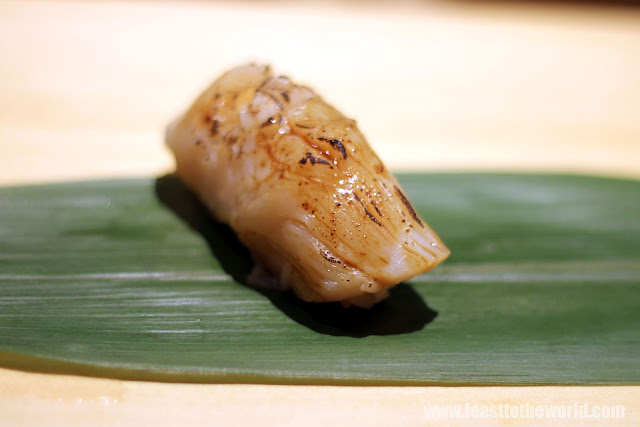 The plump scallop was once again, flame-scorched for that charred sweetness and was another melt-in-the-mouth delight. 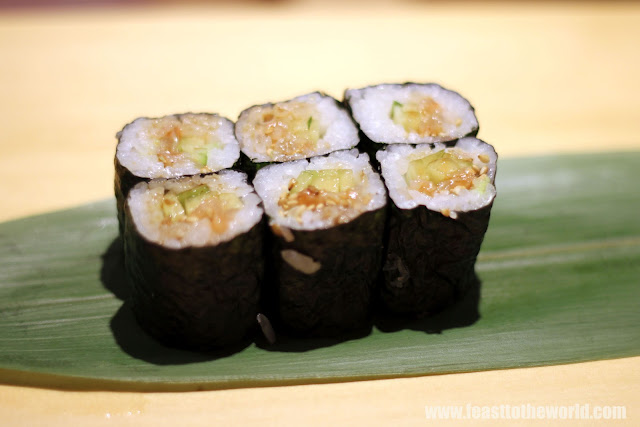 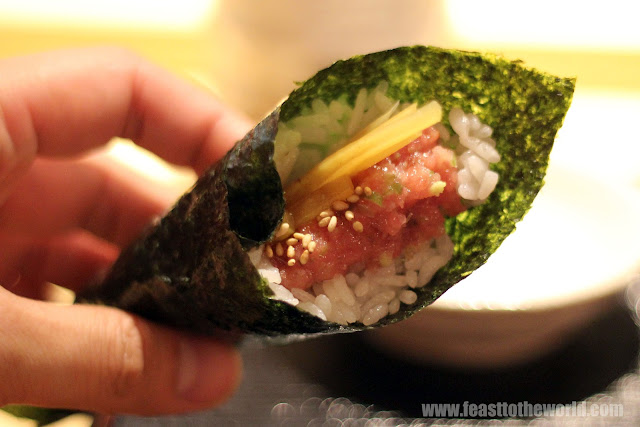 Last couple of sushi came in the form of the maki (hand-rolled) and temaki (hand-wrapped) sushi. These were not your average joe standard either. Delicate and flavoursome, perfectly balanced by the right amount of rice. The maki was filled with the Hitate Himo, crunchy scallop mantles and the temaki, with finely chopped chu-toto (medium fat tuna). These were fresh and light and noticeably more superior than any ubiquitous so-called sushi chain. 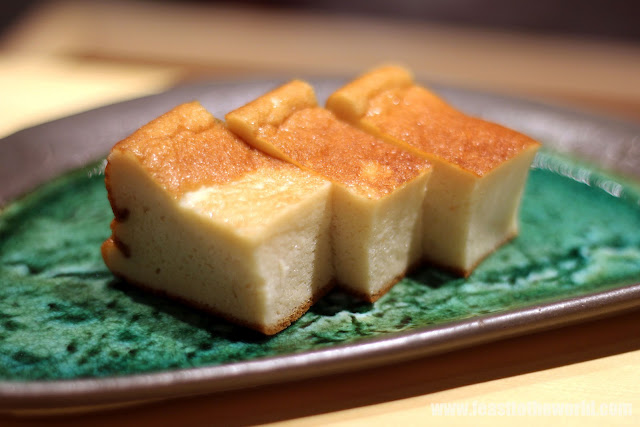 So that conclude my experience in the brilliant sushi restaurant that ideally, I would very much like to keep for myself but that would be selfish of me. On the menu, there were the set menu options starting at £9.80 for a lunch set. This won't be a cheap meal if you do it the Omasake-way but then again, fish of such quality and painstakingly prepared with such skills never will be. So if you are not willing to pay for quality, the better for me as this 7-seater joint is always full so more chances of me getting a seat for a return trip soon. 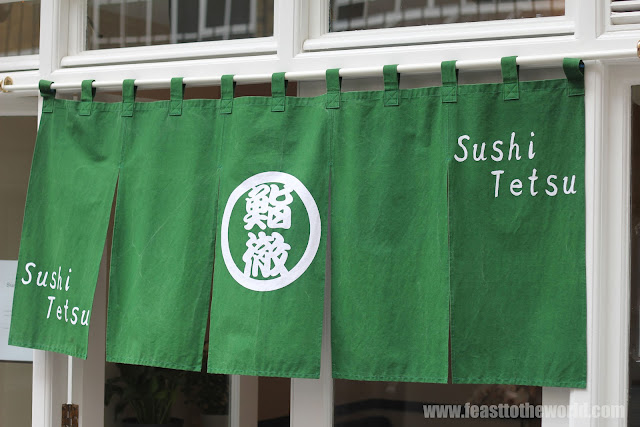