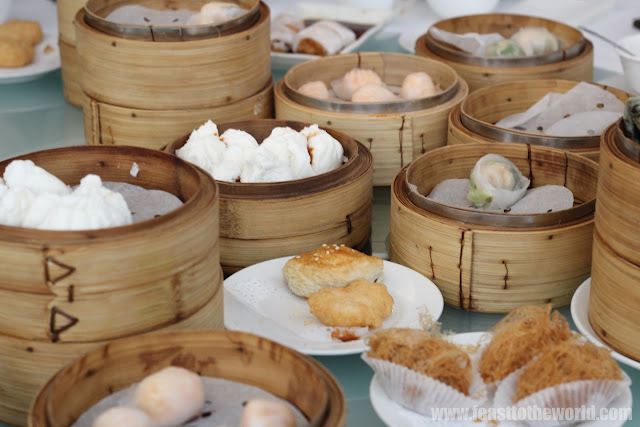 A few weeks ago, someone mentioned Princess Garden on the twittersphere, which I was told, serves some cracking good dim sum. On hearing this, a plan was hatched....to boldly where I have yet to go before....a legendary (well, according to twitter anyway) superb dim sum restaurant. The conversational went on and soon a  team of Dim Sum enthusiasts was collated to venture on this Dim Sum outing. So reservation were made and 13, yes all 13 of us descend upon this rather grand restaurant in Mayfair on a quite Sunday afternoon.

Located not far away from the Bond Street station is this rather spacious and well lit restaurant with he giant windows allowing abundance of natural light to come through. The decor is decidedly Chinese with wooden cravings and Chinese antique artefacts dotted around the waiting area at the front and throughout the entire dining room. Everything screamed luxurious and the immaculately well-dressed waiting staff further add to this expensive-looking venue. 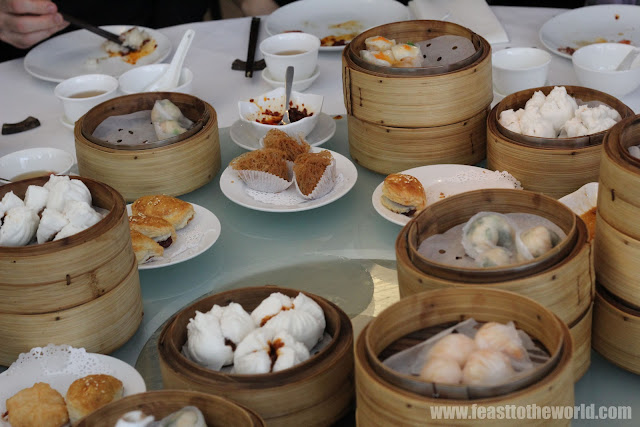 This being a first time visit for most of us, we let Erik and Sung (of Mr Noodles), both seasoned PG Dim Sum enthusiast to pick up the top of the crop for us. So 13 cups of hot tea were order and along with a whole batch of steamed, fried, baked delicious little delights were ordered and soon these began to pile up before our very eyes. And within minutes, we have ordered enough food to feed an entire army.


I must say the all steamed dumpling were all very good, the scallops and prawns were delicate, sweet and tender, the Har Gau were definitely better than most that I have had in London and the Siu Mai, which is a favourite dim sum of mine and Cherry (of Feed The Tang), were of a reasonably good standard. Off all the steamed dumplings, the stood out star for me were the more inventive Pak Choi and the Pea Sprouts version. Both greens gave a love subtle sweet crush to the meat filled morsels, both very well seasoned and had a lovely delicate flavours. Quite refreshing on contrast to the rest of the heavy, meat beaded dumplings.

The steamed Char Siu Bao were rather tiny and the filling was a bit too sweet for my liking, that said, the bun itself were nice and light. It just need a bit more dough to balance out the sweetness of the filling. The baked variety on the pother hand were perfect. Light, flaky puff pastry with a mildly sweet char siu fillings and the ratio of the pastry to fillings were just right. I could have eating a few more of these (in fact, I think I did finished the last one...oops!)

The squid cake were decent but don't appeared to have any depth to it but was enjoyable nonetheless. The taro croquette (Wu Kok) were absolutely delicious. It had a well seasoned taro paste and these were encased in some puffy bird-nest liked crust which burst into light, flaky crumbs that just gave the croquette an interesting contrasting texture.

The Lor Mei Kei (glutinous rice in Lotus leaf), which I insisted on ordering were a great disappointment, it was bland and tasteless, definitely something I will never order again from here.

Both the Chee Cheung Fun were superb. The pan-fried variety had a nice smokiness to it and the spicy XO sauce (made with fried scallop and chillies) added a touch of Umami flavour to the dried shrimp and spring onion rice rolls. And the pièce de résistance was the golden cuttlefish version. Chopped cuttlefish wrapped in sheets of  fu pei (bean curd skins) deep-fried to crispy tenderness and then wrapped in layers of silky smooth thin rice noodle. This is both inventive and superbly executed. The turnip cake too, were a joy to eat.


The puddings were slightly weak in comparison to the savoury dishes, which is always the case it seems for any dim sum restaurant. However that said the Bolo Bao (baked pineapple custard bun) were pretty decent, with sweet fragrant filling and light, spongey bun. The egg tart were way too flaky and the whole thing disintegrated before it even reaches the mouth and the deep-fried pumpkin, although looked impressive were bland and tasteless. That said, on a whole, this is definitely a good choice to sample delicious Dim Sum and despite its prime and expensive location, the pricing were anything but. We each parted with just under £20 each for the entire feast and judging from the sheer amount of food that we've consumed, this was very decent indeed.

13 might be an unlucky number to most but on this occasion, what a lucky find!