My Supperclub Hosting Debut - One Night At The Peranakan Palace @ Plusixfive

In case you are wondering, why have I not been blogging as frequently as I've used to? Well, there is a good reason behind all these slacking.....other than attending far too many pop-up events busy stuffing my face (which I still need to write about) I have been secretly plotting and scheming away trying to host my very own supperclub. I have always been toying with the ideas of setting up my very own supperclub and on a recent visit to the Plusixfive supperclub birthday party, Goz suggested to me that maybe I should host a supperclub at his venue. Thinking that it was just my alcohol-pickled brain hearing things, I casually brushed it off but it was not until the following day, with a sore head and while standing on a cramped train that I suddenly thought to myself, why not? So text messages were exchanged, followed by the 'What's app' app being downloaded onto my iPhone (persuaded by Goz, apparently it work just like texting?!) and that's when the adventure began and a collaboration is born - PluSixFive x Feast To The World

I have decided on the Peranakan cuisine as this is something that I am passionate about. This delectable cuisine is far too often neglected and undervalued. As a child, I have learnt to cook through watching my nan who would whip up some fantastic Nyonya grubs all the time. She would spent hours punning the rempah/spice paste which in her hands transformed into all these aromatic and fragrant delight. And I will still claim, to this day, that her kuih (Nyonya cakes) making skills was second to none. And to remember her and honour her, this is, in my own little way, a way to remember her.

We finally set a date and the on the midnight of the 16th June, the imminent date for the 'One Night In The Peranakan Palace' was announced. And lord and behold, right about two days later, all tickets were SOLD OUT. Upon hearing this, I was excited but at the same time, nerves began to kick in.....is this really happening?

What followed were days of hair-pulling, scalp-scratching, brain-picking, trying to come up with any possible dishes that I would like to serve for this supperclub. After more what's app messages back and forth, and a fine morning coffee meeting in Milkbar, Soho, the winning menu was finalised.

And this was what the menu for the Peranakan feast looked like:

(Note: Most of the dishes have been cooked and blogged about on my blog so I'm not going to bored you with more detail. Click on the link for recipe and a description. )

Once the menu were decided, that was when all the hard work truly began, re-testing some of my recipes and trying to convert them from a serving of 2 up to an astounding 19 persons. Not an easy feat as I soon found out that it's not just a case of multiplying.

The day before the event,  after lugging home enough ingredients to feed an entire army all the way from Chinatown (being stucked in a rammed tube while carrying all these shopping were no fun at all) my entire evening was spent slaving away over the hot stove, turning out out sheets and sheets of popiah skins and lots of vegetables chopping. My kitchen soon filled with the aromatic aroma of toasted belacan (Yum!). There were also some serious laborious rempah/spice paste pounding for that distinctive Nyonya flavour.

I woke up the following day 6.30 in the morning on a Saturday and continued with the prep. Each individual Ondeh Ondeh were rolled and all remaining cooking completed and the everything were packed away and swiftly transported to PluSixFive venue.

There I met Lin, Goz's sister who will be helping out as FOH. After a quick break for lunch at his local pub with some well deserved Kernel beer, we popped back and prep some more.....

'Eh J, Are you excited? I am seriously excited !!'

'Time check 10 minutes and people are going to start coming in, eh are you ready J?'

The night started off brilliantly, after a brief chat with the diner and get to know them. We swiftly served the nibbles to get their taste buds going. This was followed by a hands-on demonstration of our Popiah rolling technique. That's right! We made the diners worked for their dinner, such fun watching them making their own and interacting with one another. As each dish went out one after another, the feedback from the diners were great and everyone seems to be enjoying themselves and having a good time, which is what this is all about.

The most bizarre moment came when we were making the puddings. As Goz was operating the ice shaver gadget and me trying to coat the boiled ondeh ondeh with desiccated coconut, a number of the diners got off their seats and started getting involved, wanting to try the ice shaver as well as get a closer look at how we prepared the puddings. Within minutes, we were surrounded by cameras and iphone, busy snapping away. That was rather surreal and at the same time amusing.

The whole evening ended on a high as everyone seemed to have enjoyed the pudding, including the serimuku kuih courtesy of one of the diner, Lyn, coloured with blue pea flower!! (very peranakan) Plenty of alcohol were consumed, including two bottle of fine sake?!

By the time all the diners has left, we were utterly exhausted.

So it was with this sense of excitement and achievement, I ended my first ever supper club hosting night. Will I do it again? Hell yeah! What a silly question, in fact the next date has already been set.

'A Return To The Peranakan Palace' will be happening on 15th July. To book our next fun-bursting, excitement-filled Nyonya feast galore, book via Edible Experience by clicking on the link. 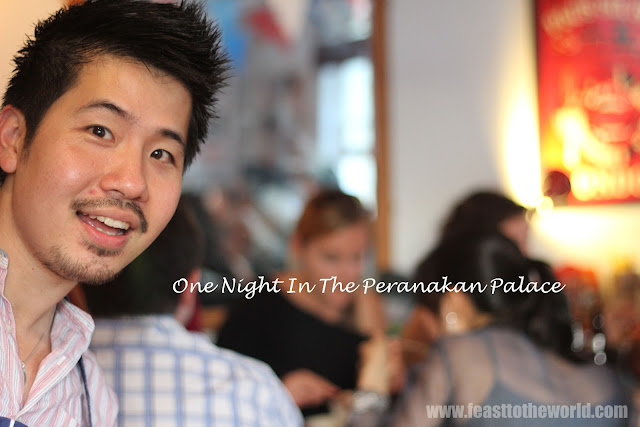 Special thanks to Erik for providing me with some of the photos.

Posted by J@Feasttotheworld at Thursday, July 05, 2012