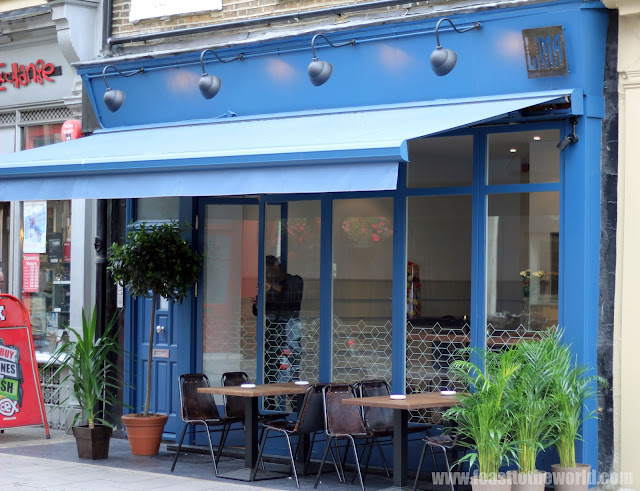 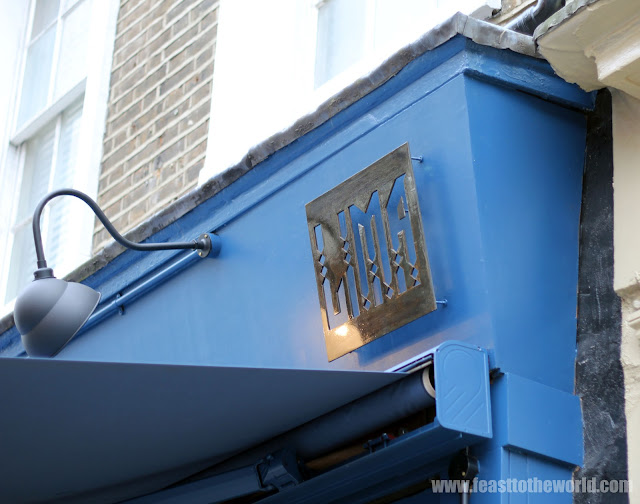 LIMA is a newly open Peruvian restaurant oversee by the Executive Chef Virgilio Martinez along with the head chef, Robert Ortiz, both a bonafide Peruvian food extraordinaire, with years of experience under their belt. This cuisine is foreign to me and I have no idea what to expect other than the usual ubiquitos ceviche. Even after months of following them on the twitter since they launched the account; through their sessions after sessions of staff menu tasting photo teases, I'm still as clueless as to what will be on the menu. However, I was fascinated by this region's offerings since the opening of Ceviche, Soho, which I have still yet to managed to patron unfortunately. Which is why I took the plunge of making a reservation even before the restaurant was opened.

On arrival to this brightly coloured, cobalt blue facade restaurant, M and I were immediately warmly welcome by Bunmi, the Maitre d' ( previously of Heston Blumental's Diner) and then we were led past the buzzing open kitchen and down to a dimly lit dining room by the bar in the basement. After expressing my dislike of dining in such a dark environment, Nina, the junior Maitre d' immediately launched an apology and explained that it was fully booked but promised us a table upstair in the bright and spacious dining area the next time we visit. And almost instantly, I've noticed a significant increased brightness within the room. A bit more light in the darkness, how's that for a service!

With the recommendation of Nina, we've ordered a couple of Pisco Sour to start with, which we were assured as a mild cocktail. The milky and frothy drinks were made with egg whites, Pisco lime and bitter. It looked innocent enough but was actually quite lethal, it's delicious but most definitely not for the faint-hearted. We then had a brief chat with the amiable Nina, whom we assumed was of the Hispanic origin was actually from Germany.

'That's why to me this drink is quite mild,' she jokingly responded when we mentioned the strong alcohol content of the Pisco sour.

She kindly explained a bit more about the restaurant and cuisine before leaving us to browse through the menu. Finding no Peruvian wine on the wine list, we settled for a Rioja  from its extensive wine list. Zulay, the waitress explained to us later that Peru was not noted for its wine.

Not the easiest of menu to navigate as the description gave almost nothing away other than the ingredients. The menu was split into the starter (tiraditos, ceviches and causas), main (mar and tierra) and puddings. After a few attempts by Zulay to take our food orders, we conceded trying to navigate it by ourselves and ask her to explain some of the dishes to us, which she did so with such brilliant knowledge. I have also ordered an additional mid course based on her advice, as she explained, the octopus dish came in a small portion.

Our wine and bread selection arrived soon after, accompanied by a dip made of sweet red pepper and cubes of butter topped with annatto, which gave a nice sweet and sharp flavours.


The artichoke ceviche starters were a thing of great beauty. Brightly coloured by the vivid reddish-pink Amazon tree tomato and the creamy yellow lemon sauce, accented by the luminous green samphires. The sauce was richly flavoured and tantalising to the mouth. The artichoke itself was slightly sweet but I wished it has a bit more taste to it. However, this was definitely compensated by the delicious sauce.


Sea bass ceviche, was described on the menu cooked in tiger's milk which was explained by Zulay that it was actually a literal translation of 'leche de tiger'. The raw fish was cubed and cured in this sauce and lime. Each mouthful was a tender bite, contrasted with the additive crunchy fried Andean cancha corn (I could easily have a tub of these on it's own). The sweet potato smears on the side of the plate was however, a rather odd choice as I haven't a clue what I was supposed to do with it. It added nothing to the fish and I'm definitely not going to lick my plate in public, thank you very much. Still, it was a beautifully executed starter.

A sharing mid-course of the octopus arrived, looking just as spectacular as the dishes before it (this arrays of beauty seemed to be an on-going theme here) This was by far the best octopus dish I have ever tasted. It was meltingly tender and has a pleasingly sweet, charred flavour. Along with the rich, purple Botija olive pureé and the clean-tasting quinoa, it was a brilliant composition.


Lamb shoulder was a tad bland for me but the accompanying black quinoa, coriander, semi-dried white grape and pisco cinnamon was superb. Same goes for the eco-dried potato, which sounded interesting on paper, was a disappointing dish. God knows why I've chosen it, being not a vegetarian myself but as potato plays a big part in the peruvian cuisine, I thought I'll give this a go (never again). The texture was interesting, like cold roast spuds drenched in a rich, tasty but congealed gravy. It wasn't overly exciting and the texture was a bit one dimensional. The addition of the grated cocao and limped micro herbs did little to savage this. It just needed a bit more contrasting texture, some crunch and perhaps fresh zingy leaves that cut through the glupinous. I left half the plate untouched. Our thoughts were fed back to the kitchen.


With the pudding, once again, we had to relied on the charming Zulay to provide us with recommendations. Mine was the dark chocolate dome, filled with rich, creamy chocolate mousse. Little dollops of sweet mango pureé provided a fragrant and fruity contrast and the crispy blue potato was a welcomed touch. I was told that this pudding had been slightly tweaked from the night before. Whatever was changed, it was definitely for the better. M's pudding was the Dulce de leche ice cream with the beetroot pureé and maca root crumble. M wasn't that keen on the beetroot in a pudding at first when we saw it on the menu, but I must agreed that Zulay was right to recommend this as it worked beautifully. M finished the entire plate, scrapping every smears of beetroot.


The entire meal came to a grand total of £164.81 including a 12.5% service charge. It might not have been the cheapest of meal, but we did had a bottle of wine and an additional carafe later on. The service on the night were superb. The waitress, Zulay (previously of River café) and Nina, the junior Maitre d' deserved a mention as they were both amiable and provided a most enjoyable evening that we have had in a long while ( I can't even remember anywhere else that we received the same magnitude of excellent service). A few of the dishes might not be to my taste, but there was no denying of the top-notch quality of the food and the brilliant execution. A very welcome to the London food scene and my favourite restaurant list.

Posted by J@Feasttotheworld at Saturday, July 21, 2012