Fly My Pretties, Fly (Because Orange Bull Give You Wings) - The Orange Buffalo, Brick Lane 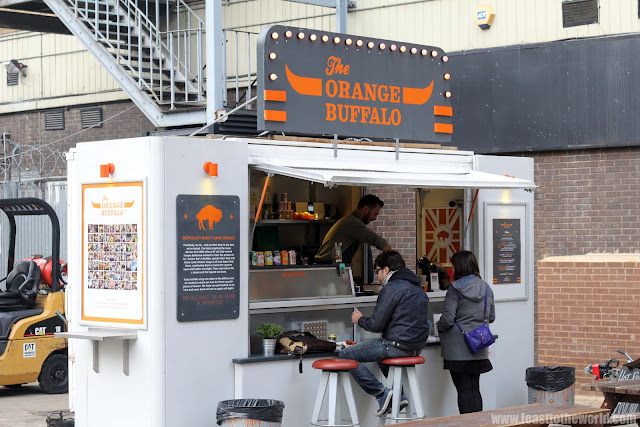 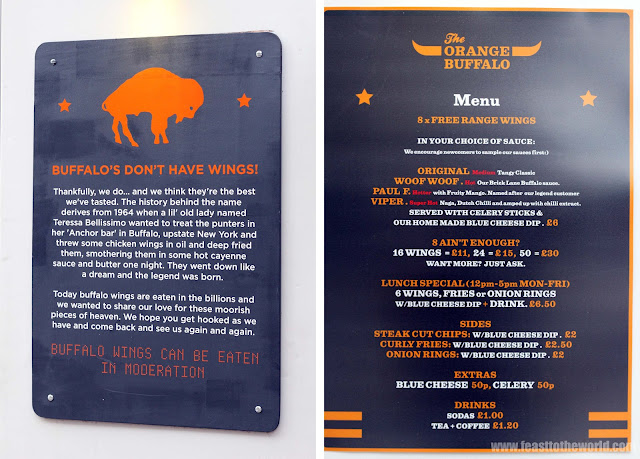 Wings are an addiction of mine, just like fried chicken. I have spent many-a-nights curbing my cravings with attempts to come up with a top notch recipe that will showcase these little meaty lollipops to their best effect. But the truth is, I love them in all their incarnations - see my late night spicy wings. Now when I got wind of a street vendor selling some bonafide New York Buffalo Wings, my inner wings radar dragged me all the way to Liverpool Street station and a moments later, I find myself being confronted by this alluring aroma, whiffing through the cold icy air.

So what are buffalo wings? It is believed to have originated from the Anchor Bar in New York in 1940 by the Bellisimo family. The chicken wings are first deep fried and then coated in a fiery sauce, served with celery baton and blue cheese dipping sauce. Now doesn't that sounds delicious and that was precisely what is on offer here at The Orange Buffalo. 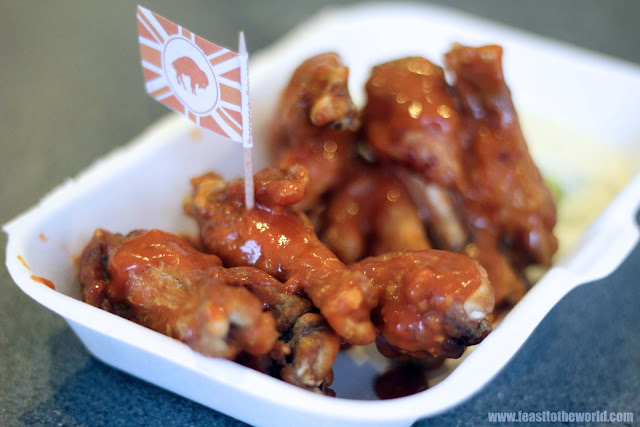 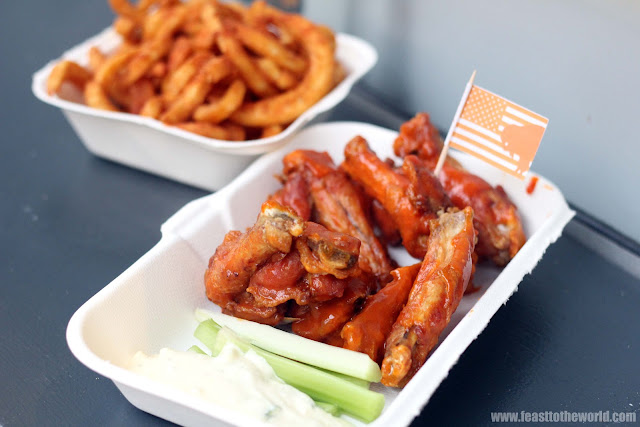 For a mere £6, you get 8 pieces of free range wings (from Smithfield Market) deep-fried to order before your very eyes. These crispy batons are then drenched in the sauce of your choice. All the four sauces on offer are homemade with different intensity of 'hotness' ranging from the medium 'Original' to the wonderfully named hot 'Woof Woof', an ever hotter 'Pawl F' and the pièce de resistánce, super-hot 'Viper' featuring the scorching Naga chilli as one of it's killer ingredients. Being the chilli fiend as I am, I went for the half and half of the hottest two, Paul F and Viper. Nick (the vendor) even adorn the viper wings with a stick of the Orange Buffalo flag,  which made me felt a bit like Adam Rickman (of Man Vs Food) in one of his hot wings challenge here.

The wings were flavoursome and lean, with just enough meat to allow the sauce to be the equal star and not just an inferior side-kick. Paul F were slight sweet and fruity with a tinge of chilli kick which, although were good, will have to play second fiddler to the stinging Viper. It's punchy kick and tanginess paired well with the crunchy skin and tender meat of the wings, just hot enough to allow you to savour the brilliant combination without having to chug down pints of ice cold beer to ease the pain. The accompanying rich and creamy blue cheese dipping sauce help with cooling down the heat. Like most street food, these are messy business, so expect to be smother in gooey sauces and be prepared to lick your fingers. There were paper towels on the premises but why on earth would you let the sauce go to waste? It belongs in your mouth and not on some dead trees. 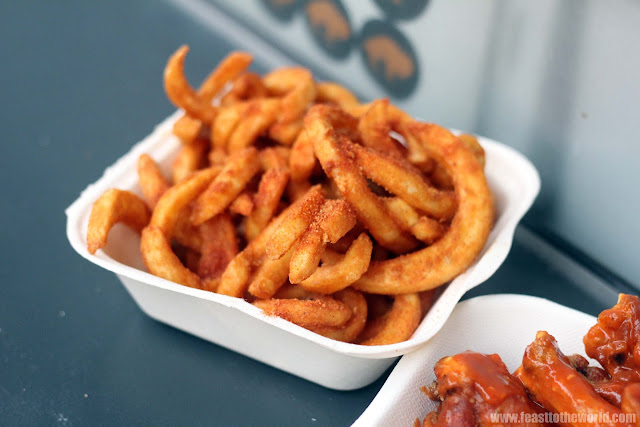 One of the most exciting find on the menu was the inclusion of curly fries. These springy, fusilli-like curly potatoes chips concoction were one of my childhood favourite and they did not disappoint. Crispy and topped with the mandatory American Chip Spice...Ah! It was good! So now I'm torn, will I be coming back for the wings or the curly fries. Well, either way, as Arnold once said..... I'll Be Back! (in a dodgy Austrian accent)

Posted by J@Feasttotheworld at Saturday, November 03, 2012