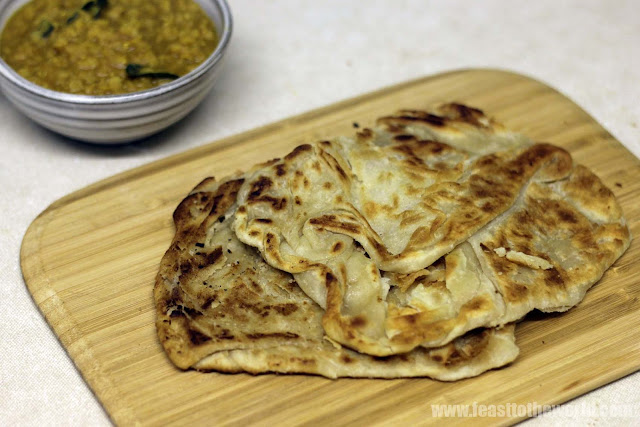 Roti Prata/Canai is a Singapore Indian classic. Found in many hawker stalls and is a particular favourite snack of mine. When I was in the National Service and was based in the Singapore Seletar army camp. There used to be a rather popular stall right near the exit of the base camp. Well, it's popular possibly because it was the nearest prata stall to cater for the glutton hunger of thousands of servicemen. But from memories, I could still remember it being really good. Anyway, I frequently cycled over to this delightful hawker stall in the late night, yearning for some crispy and flaky roti prata and the spicy lamb curry that comes with it. So good it was that I find myself salivating at the though as I am typing this post. 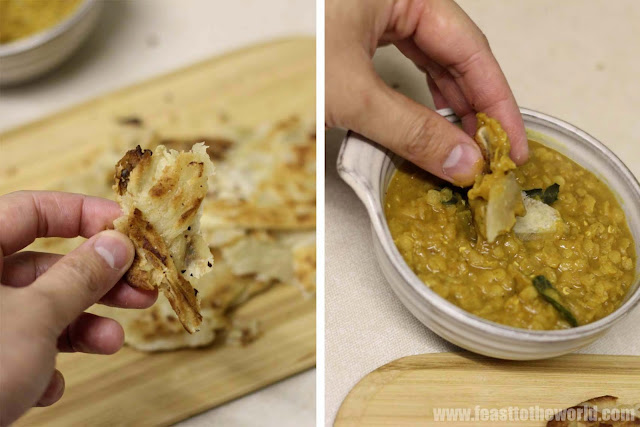 Other than being a fantastic night snack, they also make for excellent breakfast. Yes, we do have prata for breakfast. Think of it as toast if you like and it just make logical sense. Fried to crispy awesomeness, it's just like a freshly toasted bread. Well, the curry sauce might be a bit more unusual but there's no reason why you can't dunk your toast into curry and call it breakfast. If this idea of curry dunking worries you, try scatter over granulated sugar. It's like jam, no? It provide a sweet and crunchy mouth feel which is why this is another popular way of eating prata. Sometimes eggs are also added to the prata to enrich them but this is entirely depending on your preference as both the plain and the egg version are just as delectable. Stretching the dough will be the trickiest part of this recipe but as with most things, practice makes perfect. In the hand of a professional prata maker, the ball of lubricated dough will be tossed and flipped into this ultra-thin flaky bread.

Any curry can be used to accompanied this but the most common and traditional type are the lamb or dhal curry. However, I have eaten this with my left over Nyonya chicken curry and beef rendang and it is just as equally delicious.

Curry, to serve
or
Granulated sugar, to serve

In a large bowl, sift the flour and the salt. Rub in the butter until it resembles a crumbly mixture. Add the condensed milk and water and mix to form a dough.

On a clean working surface, knead the dough for 10-15 minutes, until it is soft and has a smooth appearance.

Divide the dough into 8 equal pieces. Roll into balls and coat each pieces with the melted ghee. Place them in a clean bowl and cover with cling film. Set aside for at least 2-3 hours.


After these time, oil the work surface with the remaining ghee to prevent the dough from sticking. Flatten each ball using your palm into very thin sheet. Stretch it out even thinner by pulling the edges outward until it is almost translucent. You should have a rough circular shape.

Fold two opposite ends inward so you'll end up with an oblong shape. Now fold the other two ends to form a square. 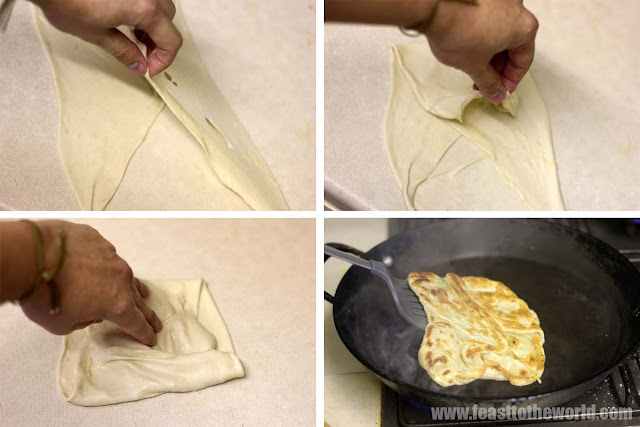 Note: For an egg roti prata, break an egg onto the centre of the dough, prick the yolk to burst it and spread the egg before folding the ends. 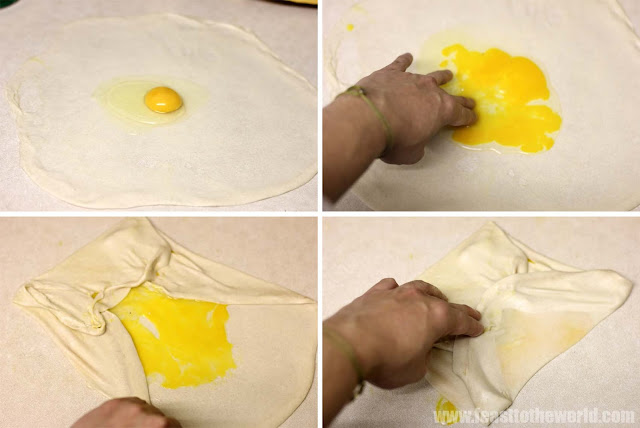 Heat up some ghee in a frying pan over medium-high heat until smoking. Place the folded dough fold-side down and cook for 2-3 minutes, until brown and crispy before turning over to cook the other side for another 2 minutes. Once cooked, remove and using the palms of both hands, crush the still warm prata to fluff it up so that it's flaky. Set aside and keep warm. Repeat with the rest of the prata dough.

Serve immediately with either curry or a liberal sprinkle of granulated sugar.

Posted by J@Feasttotheworld at Sunday, December 02, 2012