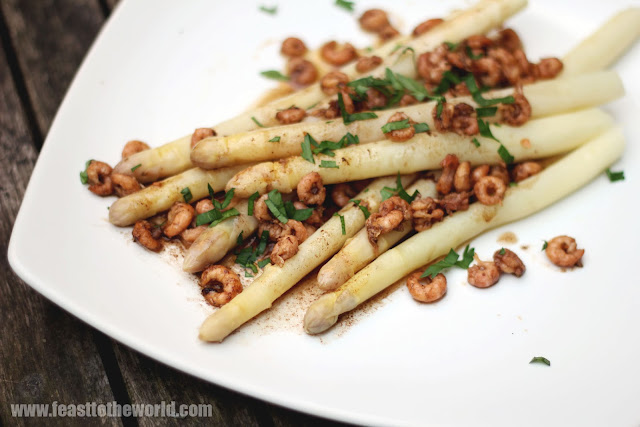 I love spring for its many wonderful produce. One such gem is the white asparagus.

These ivory white shoots are grown underground, away from the sunlight which is why unlike its green counterpart, do not develop chlorophyll and attribute to its white appearance. They are harder to cultivate as they have to be constantly recovered with soil to shield them from the sunlight and this labour intensive farming is reflected on its heftier price.

As much as I adore the traditional asparagus, this white cousin of their has a much milder flavour which I do love. 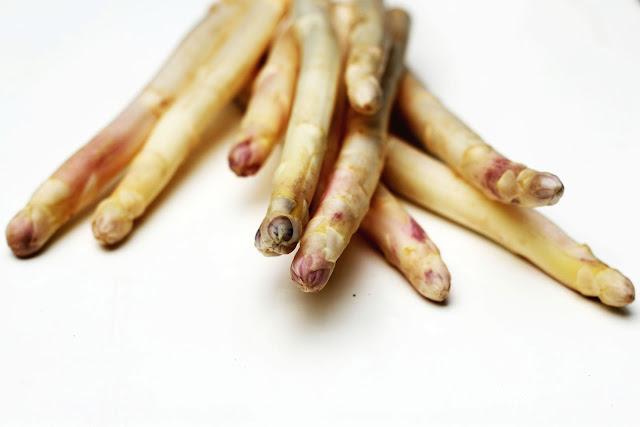 These shoots are not that common here in Britain and they are normally imported from other European countries like Germany or France. Usually only available from a handful of farmers market or online and only for a short period of time (from April to June). But of course that is all set to change with a recent announcement that the first batch of British grown species will be sold to some of the giant supermarkets making it more widely accessible. But if you ask me, I would still prefer to tread my way to a farmers market to get hold these homegrown white beauties.

Try to seek out the thicker spears as unlike the green varieties, the chunkier they are, the more tender they are likely be. But as it start losing it flavour as soon as it is picked, its best eaten on the day to make the most of its sublime flavour. 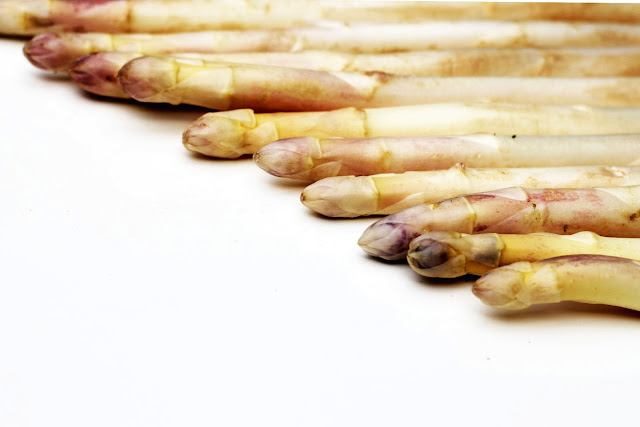 Due to its delicate flavour, steaming is my favourite method of cooking them. As I've mentioned before in my last asparagus post, I do not believe in wasting the goodness by boiling them in water. They are fantastic with a dollop of homemade aioli, hollandaise or top with a perfect poached egg, sliced open and watch the golden yolk oozes down the nooks and crannies, coating each spears with glorious yellow blanket.

My ultimate favourite however, is to serve it with a luxurious brown shrimps and browned butter sauce. This nutty sauce inject such wonderful buttery sweetness that it just make this dish definable only by the word - Awesomeness. A dish truly worthy of this rising star. 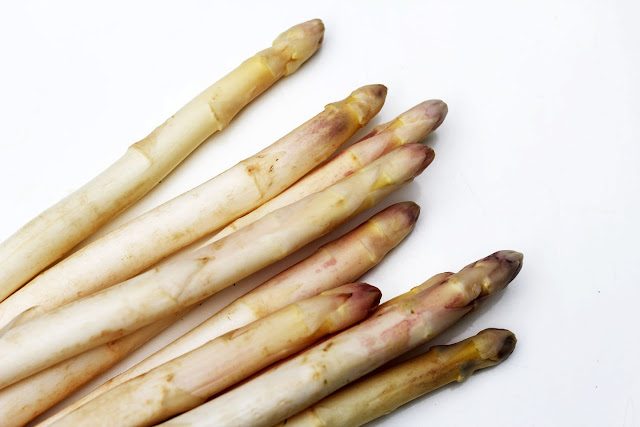 1 bunch white asparagus (about 10-12 spears)
50g unsalted butter, cut into cubes (this helps them to melt evenly and quickly, so less likely to burn)
100g brown shrimps
juice of half a lemon
a small handful of fresh parsley, chopped
sea salt and black pepper, to taste

To prep the white asparagus, snap off the woody end, lay the asparagus flat on a chopping board and peel the tough bitter skin with a vegetable peeler. Repeat until all the asparagus are trimmed.

Prepare a steamer and steam the asparagus for 8-10 minutes, depending on the thickness, until tender and cooked. Remove and place onto a warm plate and keep warm while you make the sauce.

Heat a frying pan over medium heat and add the cubes of butter. Once the butter has melted and starts turning light brown (this takes literally seconds so do not move away from the stove, you don't want it to burn!), add the brown shrimps and cook for 1 minute until heated through. Squeeze over the lemon juice and throw in the parsley. Season with salt and black pepper.

Spoon this over the white asparagus and serve immediately with a glass of chilled white wine and some crusty bread to mop up the sauce.